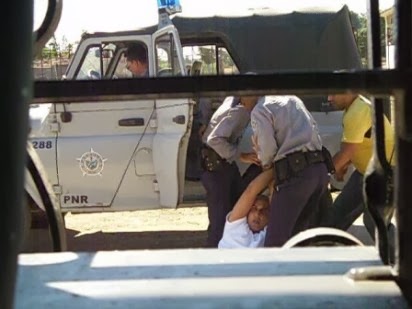 Throughout 2013, many of Cuba’s democracy leaders have visited the United States, where they have met with policy makers, journalists and rights advocates.

They have given the world a first-hand account of the nightmare they live in Cuba — the increased and unfettered repression they face at the hands of the Castro regime.

They have shed blood, sweat and tears — and some have made the ultimate sacrifice.

They have warned about Castro’s cosmetic “reforms.”

They have highlighted the importance of technology and asked for international support.

And with few exceptions, they have urged the United States not to lift sanctions.

Dissident leaders including The Ladies in White‘s Berta Soler, UNPACU‘s Guillermo Farinas, Estado de Sats‘ Antonio Rodiles and the National Resistance Front‘s Jorge Luis Garcia Perez “Antunez,” have all stressed that the U.S. should not be considering lifting sanctions at this time.

“If you did an opinion poll among Cuban opposition activists, the majority would be in favor of not lifting the embargo.”

Farinas stressed this point during a visit to Washington, D.C.:

“The overwhelming majority of dissidents on the island do not support the lifting of the embargo. There are those who do support its lifting, and we respect their criteria, but they are mostly intellectuals who do not have a membership base behind them.”

We have all been awed by the courage, intelligence and resilience of these democracy leaders.

Well, most of us.

Unfortunately, some Florida businessmen have been too busy, uninterested or arrogant to heed their advice.

They are too focused on potential profits, lost mansions, yacht parties and their art collections.

In Cuba, they have kept their distance from these democracy leaders in order not to “offend” their totalitarian hosts.

In the U.S., they attend cocktail parties and presentations by Castro regime officials, but don’t have time for Cuba’s democracy leaders.

Rather than offering their support to the unselfish goals of Cuba’s democracy leaders, they have been exploring selfish business partnerships with the totalitarian dictatorship that represses them.

The good news is that these businessmen are the exception, not the rule.

And while history will forever honor the names of Cuba’s democracy leaders, the legacy of these businessmen remains fickle as their fortunes.