Cuba Moves In for the Kill 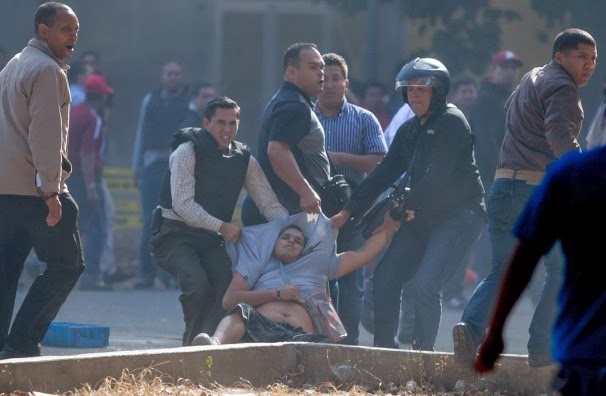 Two people were shot dead Wednesday during a march to protest the government in the streets of Caracas. Their identities have not been officially released, but sources in Venezuela say the march was part of “youth day” and that many of the participants were students. A third person was killed in a separate political showdown in the Caracas municipality of Chacao.

Nor have the perpetrators of the crime been identified. But it is unlikely that the opposition shot its own. Venezuelan strongman Nicolas Maduro has announced that street protests are hereby prohibited. He has also put out arrest warrants for Leopoldo López, the former mayor of Chacao, and at least one retired military officer who has been a vocal government critic.

The violence against unarmed citizens is reminiscent of the April 11, 2002, bloodletting, when 17 individuals who were part of a peaceful opposition march in the streets of Caracas were similarly gunned down by snipers. That was the day the head of the military told Hugo Chávez that he would not move against the crowd and that he was removing Chávez from office. Chávez prevailed, in part due to U.S. dogma against “a coup” and in part because the opposition bungled what ought to have been a transition to democracy.

Twelve years later, Mr. Maduro is facing official inflation of 56%—probably much higher—and food shortages. The government admits that in its latest survey, 28% of basic food stuffs cannot be found on store shelves. On Monday Toyota and General Motors announced that they had to suspend operations at their assembly plants due to a shortage of parts, which come from abroad. News reports say at least 12 million Venezuelan jobs are at stake.

The problem is that the central bank cannot supply the dollars necessary to pay suppliers of imports of manufacturing components or food. When dollars have to be secured in the black market, price controls make it impossible for vendors to make money. Until now large international companies have been limping along. Most other entrepreneurs have had a much more difficult time.

In a democracy, such desperation often signals the fall of the government. But the democracy is long gone. Mr. Maduro has been coached by Cuba all his adult life, and it shows. The government has control of all Venezuelan television and radio. During the heat of the violence it blocked the signal of Colombian news station NTN, which had been supplying Venezuelans with up-to-the-minute information.

The last gasp of press freedom is print media. But now newspapers say they cannot get the dollars to buy newsprint and will have to shut down soon. In other words, they will go the way of all the other democratic institutions in the country.

The military government’s prohibition on street protests is the final nail in the free-speech coffin. The opposition has pledged to disobey that command, which means that enforcing it will require more violence against the public. If that happens, the Chávez dream of turning the country into another Cuba will have become a reality.