Capitol Hill Cubans wonders what the going rate might be for the influence of Cuba’s vile, repressive, and racist Castro dictatorship:

How Much Capital Does Castro Require for “Influence”? 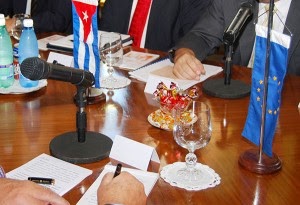 Last month, the European Union agreed to begin talks with the Castro dictatorship in pursuit of a special cooperation accord by the end of 2015.

If an accord is reached, it would replace the EU’s 1996 Common Position towards Cuba, which is composed of a symbolic set of diplomatic sanctions.

But here’s the money quote, literally:

How could that be?

Upon the collapse of the Soviet Union, European nations began investing billions in the Castro regime.

During the “Special Period,” it was European investment in Cuba’s tourism industry (in minority partnership with Castro’s monopolies) and its “leisure” travelers that economically sustained the regime.

Even after the Common Position, European companies and tourists have been unwilling to cut their revenue stream to the regime. To the contrary, it has steadily increased.

And yet, they have no influence?

So how many more billions does the Castro regime require for “influence”?

Needless to say, this is the same “suckers” model that Castro’s lobbyists would like the U.S. to pursue.