The country of Venezuela esta en candela (is on fire). Yesterday, tens of thousands of demonstrators joined students on the streets all over the country to protest repression and the tyrannical and corrupt government imposed upon them by the self-appointed colonial masters in Havana. Cuba’s brutal and repressive dictatorship is desperately trying to quash the mounting resistance to their rule in Venezuela and is attempting to employ the same Stalinist tactics they have used in Cuba for more than a half-century.

Although they managed yesterday to capture Leopoldo Lopez, a prominent leader of the opposition, the Venezuelan people now seem more determined than ever to rid themselves of the Cuba-Castro cancer that is quickly destroying all liberties in their country. 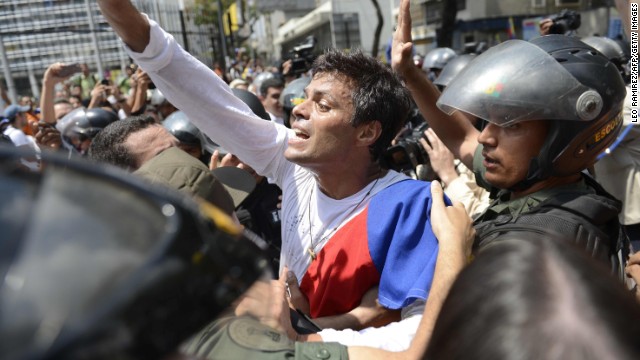 And now a man who led them in days of anti-government demonstrations is behind bars after turning himself in to authorities.

But Venezuelan protesters were still in the streets after opposition leader Leopoldo Lopez’s arrest Tuesday, demanding better security, an end to scarcities and protected freedom of speech.

President Nicolas Maduro and his supporters also rallied, blaming the opposition for causing the very problems it protests.

Clashes during days of demonstrations have already left three anti-government protesters and one government supporter dead. And the simmering tensions show no signs of letting up.

The confrontation took a dramatic turn Tuesday, when Lopez, accused by the government of conspiracy and murder in connection with the recent violence, marched with a crowd of thousands of protesters before surrendering to national guard troops.

“The options I had were leave the country, and I will never leave Venezuela!” Lopez told the massive crowd. “The other option was to remain in hiding, but that option could have left doubt among some, including some who are here, and we don’t have anything to hide.”

Hours later at a rally with throngs of supporters, Maduro said the head of Venezuela’s National Assembly had helped negotiate Lopez’s surrender and was taking him to a prison outside Caracas.

CARACAS, Venezuela — Moments before his dramatic arrest, opposition leader Leopoldo Lopez told a sea of white-shirted supporters that he doesn’t fear years behind bars if that’s what it takes to open eyes to the damage done to Venezuela by 15 years of socialist rule.

“If my jailing serves to awaken a people, serves to awaken Venezuela … then it will be well worth the infamous imprisonment imposed upon me directly, with cowardice” by President Nicolas Maduro, a defiant Lopez shouted through a megaphone Tuesday from atop a statue of 19th century Cuban independence hero Jose Marti in a Caracas plaza.

He then pushed his way through the crowd, waving a flower over his head, to a police line a few feet away and turned himself in to face charges blaming him for violence between opposition activists and pro-government forces last week. He was driven away in an armored vehicle, and a judge later ordered him held in jail before a court appearance Wednesday.

Friends and allies say the steely resolve exhibited at the rally is often seen in the man who competes in triathlons, is addicted to extreme sports and once escaped from the clutches of gun-firing bandits while stumping for votes in a pro-government slum. The trait has been evident in recent months as he emerged as head of an increasingly powerful opposition faction that is pushing for a stronger, but non-violent confrontation with the government.

Exclusive photos from the Maduradas blog: