“You are who decides, you have to make the decision to decide. You are the protagonist. The first step is to allow all that is good within you to come out and to rid yourself of grudges, of hubris, or of arrogance if you have abused power, of fears, and of that desperation that paralyzes many.” – All Cubans, The Path to Change, last page of printed handout under Orientations

My father should be celebrating his 62nd birthday. Join us tonight, 7:30pm to talk about #SOSVenezuela and Cuba. –  Rosa María Payá Acevedo over twitter 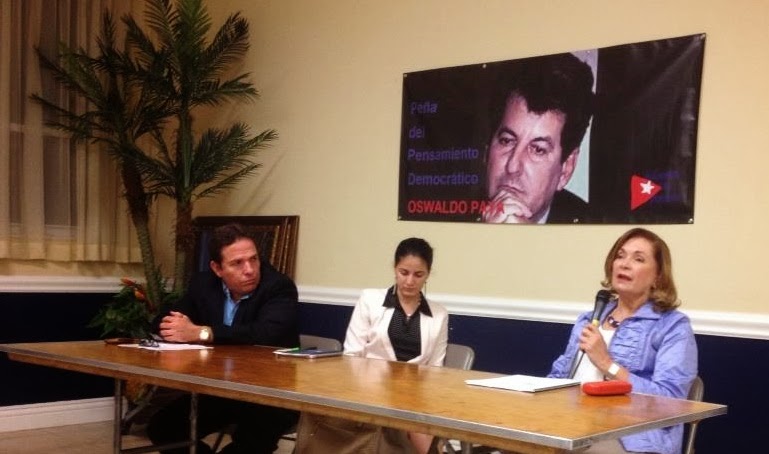 Oswaldo Payá should be together with his family tonight in a modest neighborhood in Havana, El Cerro, celebrating his 62nd birthday. However, the totalitarian dictatorship that tonight is overseeing the murder of students in Venezuela who want to see their homeland freed, nineteen months ago on July 22, 2012 murdered both Oswaldo and Harold Cepero, a Christian Liberation Movement youth leader.

Following these killings of which the circumstances have not been cleared up the Payá saw an intensification of death threats, state security surveillance, and persecution. This led the matriarch of the family, Ofelia Acevedo to decide that before others were murdered that it was time to see political refuge in exile. Tonight the Payá family held a teach-in on the situations in Venezuela and Cuba with Gisela Parra, an exiled magistrate and a member of the opposition as guest speaker.

The question arises: Why does the Castro and Maduro regimes fear those who speak the truth, and peacefully assemble. Neither Oswaldo, Harold or the Venezuelan students, murdered over the past two weeks, were violent.  On the contrary the counseled against violence, and hatred. However they also counseled against being afraid, of having hope and living in truth.