Capitol Hill Cubans addresses the surreal musings coming from the ideological left and their alternative universe: 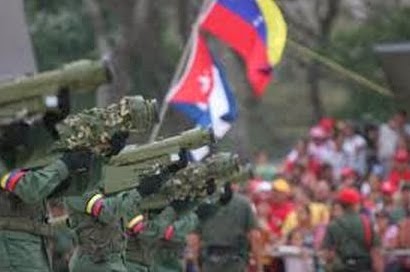 In today’s Financial Times “analysis” entitled, “Venezuela: In search of a solution,” the byline reads:

“Cuba is helping its closest ally find a peaceful resolution to violent protests.”

(UPDATE: Since our post, the byline has now been updated to read, “Cuba has the most at stake in helping find a peaceful resolution to violent protests.”)

In other words, the Financial Times believes that the Castro regime, which is largely responsible for the conflict and violence in Venezuela, can be a “peaceful” mediator in ending it.

Apparently, the Financial Times is unaware of the over 50,000 Cubans sent by the Castro regime to Venezuela, including military, intelligence and security officials.

Or perhaps, it’s (the only one) unaware of the Castro regime’s control of Venezuela’s repressive apparatus.

Or, of the decades of conflict the Castro regime has planted throughout the world through the training and support of Venezuela’s very own Carlos “the Jackal” — or ETA, FARC, ELN, PLO, M-19, Medellin Cartel, Montoneros, Macheteros, FLN, EGP, MIR, IRA, FALN, NLF, MRTA or PFLP, just to name a few.

Or, of the Castro regime’s recent trafficking of weapons to North Korea, in violation of international law.

Or, of the Castro regime’s welcoming of a Russian spy ship this week to the Port of Havana.

Or, of the Castro regime’s harboring of violent criminals, including a U.S. most wanted terrorist and the leaders of Gaddafi’s former political assassination squads.

Or, of its tacit support for Russia’s intervention in Ukraine, Assad’s genocide in Syria and Iran’s procurement of a nuclear weapon.

Or simply, of the Castro regime’s refusal to peacefully mediate with its own citizens, rather than employing violent and repressive tactics.

When a serious newspaper appears so clueless, it’s either because of biased editors in London or questionable “experts” (hacks).

Wonder what their next act will be?

To propose Putin as a “peaceful” mediator in Ukraine?

Or perhaps, Hezbollah as a “peaceful” mediator in Syria?