Many Cubans were excited to learn recently that the apartheid Castro dictatorship had given its telecommunications monopoly, ETESCA, authorization to begin providing internet service to private residences in Cuba. The price for this connection was ridiculously exorbitant, but that problem could be easily solved with some remittances from Miami. Nonetheless, the celebrations will have to be cancelled because it seems the munificent and magnanimous reformed dictator of Cuba is not so munificent, magnanimous, or reformed. 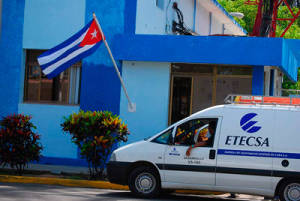 The company said that false news has been circulating in recent days. “This is “untrue and misinforms people.”

Different websites reported recently that the government of Raul Castro plans to authorize citizens in the coming months to contract private Internet connection from their homes at very high prices.

Etecsa denied the information and noted that the tariffs apply only to companies and organizations. “Any information on the opening of this service to households will be duly communicated by the company,” it said in a press statement.

Cuba has one of the lowest Internet access levels in the world. The population of the island need special permission to contract private access from home, granted to a select number of officials, artists, diplomats or foreign companies. These old style dial-up connections also suffer from very poor transmission speed.

The best access is available at some tourist hotels but with prices averaging US $8.00 to $10.00 an hour.

In mid-2013 Etecsa opened over 100 cafes throughout the country that improved public access to a segment of the population. Those capable of paying $5.00 per hour in a country where the average wage is $20 a month includes, to a large extent, those with family members abroad that send significant remittances.

The government accuses the economic embargo imposed by the United States for the bad internet access on the island. Castro detractors argue that the lack of connectivity owes to a restrictive government policy.

In mid-2013 Etecsa announced that a fiber optic cable laid two years earlier from Venezuela had finally become operative. However, despite improvements in infrastructure, service continues way below regional and international standards for access to the network.