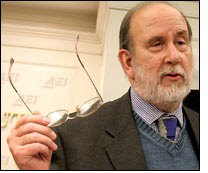 The “news” is resolutely out of context.  A subject about which virtually nothing is known–the mystery of the missing airplane–gets saturation “coverage,” while events of potentially earth-shaking importance are largely unreported. Twitter is full of tweets, photos and videos from the streets of Venezuela, but the Maduro tyranny expelled CNN, and Wolf Blitzer crams his airtime with heads talking about the Malaysian passenger jet.  Any self-respecting “news network” would relentlessly run stories about the ongoing demonstrations from Caracas to Maracaibo–demonstrations surely the equal of those from Maidan Square in Kiev–but no.

The Venezuelan uprising may turn out to be the biggest story of all, because it is part of a world-wide battle that pits anti-Western tyrannies against their own people, and against their neighbors.  It is of a piece with Ukraine, Syria, Iraq, Egypt, Lebanon, Iran and Russia itself, where, just a few days ago, fifty thousand Muscovites demonstrated against Putin’s imperialist moves in Ukraine.

I’ve been saying for years that we’re the target of a global war, that the Pyongyang-Beijing-Moscow-Tehran-Damascus-Havana-Caracas etc Axis of Evil is hell-bent to dominate and destroy us.  Now the evidence is so clear that only a willfully blind man could fail to see it.  When the pundits were saying that Assad’s doom was imminent, I warned that he had the full support of Russia and Iran, and they would not go quietly.  He didn’t, but the pundits are still trying to unscrew the inscrutable jihadi networks and alliances, invoking the tired chant of Sunni vs Shi’ite, and refusing to see the battle of Syria in the context of the real war.

Today, the repression of the Venezuelan people is under the command of Cubans and aided by Hezbollahis, which is part of the same picture that has Russian troops-in-mufti operating in Ukraine, Iranian Revolutionary Guards and Hezbollah killers operating in Syria, Iranian-guided terrorists fighting in Yemen, Iranian-trained Taliban killing Afghans and Americans, and on and on.  That picture has been clarified by the announcement that Russia is opening naval bases in Latin America.