I guess you can call it a match made in heaven (or more concisely, hell): An iconic American university dominated by leftist academics giddily opening its arms to a corrupt dictator infamous for quashing freedom of speech and thought. And like all tragic love stories, passions always overwhelm reason.

Via the Washington Free Beacon complete with quotes from our very own Dr. Carlos Eire:

Has been criticized for anti-American rhetoric, crackdown on press freedoms 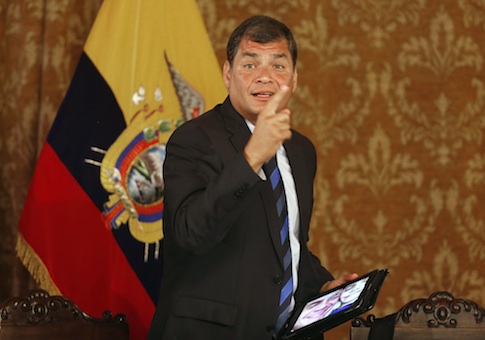 Ecuador President Rafael Correa—who has been widely criticized for his anti-American rhetoric and domestic crack down on press freedoms—will speak at Harvard University next month, the Washington Free Beacon has confirmed.

Local Ecuadorian media last week first reported that Correa would be speaking at Harvard, Yale University, and the Massachusetts Institute of Technology (MIT) during the second week of April. Reports also said he would deliver his weekly radio and television address “Citizen Link” from New York.

A Harvard spokesperson told the Free Beacon that Correa will address the John F. Kennedy Jr. Forum at Harvard’s Institute of Politics on April 9 at 6 p.m. The forum is subject to a ticket lottery and will be streamed online. The topic of his address has not yet been determined and the school will not compensate him.

Correa’s potential talks at Yale and MIT could not be confirmed by press time. School spokespersons did not respond to multiple inquiries.

Carlos Eire, a history and religious studies professor at Yale who has also written books about Cuba, said in an interview that he doubts students attending Correa’s address will know much about him.

Eire said he believes Correa aims to assume leadership of Latin America’s ALBA group, a bloc of socialist countries founded by Venezuela and Cuba. Chavez, a close partner of the Castro brothers in Cuba, used Venezuela’s immense oil reserves to spread his influence throughout the region.

“It’s like a cancer spreading from Cuba to Venezuela,” he said. “Now there’s hardly any country in Latin America that is not going in that direction.”

“They’re all heading toward this kind of ‘21st century socialism,’ and one of its features is that the state controls the media—it’s very Orwellian,” he added.