Text of the exchange is available below the fold:

Senator Marco Rubio: Rightfully so, that you focused on information sharing, and so forth, because Cuba, according to Freedom House, is the second most repressive government in the world, only after Iran — and my understanding is it was a very close second — after Iran in terms of denying access to information sharing, denying access to the Internet. People in Cuba can’t go on the Internet. I mean, if you’re close to the government you may be able to sneak in Internet access here or there. But the average person on the street cannot go on the Internet in Cuba. It’s not just a capacity issue, it is prohibited.

In fact, I’m going to send out a tweet right now. If I sent this tweet in Cuba, I would be put in jail. And I’m going to send it right now as an example of what people in Cuba cannot do. People in Cuba cannot do what I’m about to do. And so as a result of that, USAID — as has been revealed in the last few days, but was available for people to see if they were interested in it — USAID had a program, called ZunZuneo, which was designed to provide the people of Cuba access to information, and to break the information blockade and to allow people to share information. And I want to walk through this. First of all, there’s been an insinuation made by some that this program was illegal. When, in fact, this program, in my opinion and I think in yours as well, was completely within the stated mandate, within the stated purpose of your programs in Cuba: To break the information blockade, to promote information-sharing. That’s accurate, right? That was right within that goal?

Honorary Rajiv Shah: We have publicly notified that these programs are designed to enable open communications.

Rubio: And the other argument I’ve heard is, ‘Well, this was a covert program.’ But, in fact, this program was reviewed by the General Accounting Office, right?

Rubio: And they made no suggestions for changes? They had no criticism of the way the money was being administered?

Shah: They actually complimented USAID on improved management oversight of the program.

Rubio: This wasn’t an intelligence program? We weren’t spying on the Cuban government using this program?

Rubio: We weren’t selling weapons on this program, or somehow arming elements on the ground in Cuba through this program?

Rubio: So this program basically was allowing Cubans to be able to communicate with other Cubans because their government doesn’t let them do that. By the way, in an advanced society in the 21st century, people should at least be able to do that, right? But in Cuba they’re not, and so, what this program chose to do was to fulfill the mandate of this program, as informed by Congress, to break the information blockade and to promote information sharing. So I read this article, and it said that, at its peak, there were 40,000 users on the program. That’s actually not true, right? At its peak it had 68,000 users.

So here’s my question, when was the last time that we stopped a program because it was too successful? Because this program, in my mind, is successful. Not only am I glad that we did this program, what I’m upset about is that we stopped. And I don’t think we should just stop at Twitter-like programs, I think we should do everything possible, maybe USAID is not the perfect agency for this, what I’m about to talk about, but I believe we should do everything we can to provide the people of Cuba and other repressed societies full access to the Internet, so they can go on any website they want. If they want to visit Granma, which is the communist rag in Cuba, they can read it all they want online. And if they want to read the CNN website or the New York Times or Huffington Post or Drudge, whatever they want to read, they should be able to do that as well.

I think, for everyone who is outraged by this program, when was the last time that undermining a tyranny is counter to the stated purposes of the United States of America? When is the last time that we’ve been outraged by a government program that undermines a tyranny and provides access to a people of a country to the free flow of information and the ability to talk to each other?

I read these quotes in the paper, people setting themselves on fire around here, ‘Oh this program,’ I heard one quote, ‘cockamamie.’ Since when? We had radio broadcasts to Europe during the Cold War. We have radio broadcasts to Cuba right now. Those actually have content in them. All we wanted people to do was to talk to each other. And I want to know, when was the last time that it was against a stated purpose and goals of the United States of America to undermine a tyranny? By the way, a tyranny that, we heard testimony here just three days ago, that is involved in the single greatest violation of U.N. sanctions against North Korea since they were imposed, a tyranny that votes against us in every international forum, a tyranny that is consistently on the side of every mad man and tyrant on the planet. If there was a vote on Syria, they’re with Assad. When there was a vote on Libya, they were with Qaddafi. If there was a vote on Russia, they’re with Putin. If there is a vote on human rights violations in China, they’re with China, time and again. When was the last time that Cuba, in an international forum, ever lined up on the side of decency and human rights. This is an anti-American government that doesn’t just undermine its own people, it tries to undermine our foreign policy aims and the foreign policy aims of the free world.

And so, my question would be, and I know this is a long-winded question: when do we start this program again? What do we need to do to start, not just this program, but expand it, so that people in Cuba can do what I just did? And that is speak freely to the world, and to each other, about the reality of Cuban life, and about anything else they want, including the latest record from Beyoncé or Jay-Z or what someone wore to the Oscars – whatever they want to write about. When do we start this again? 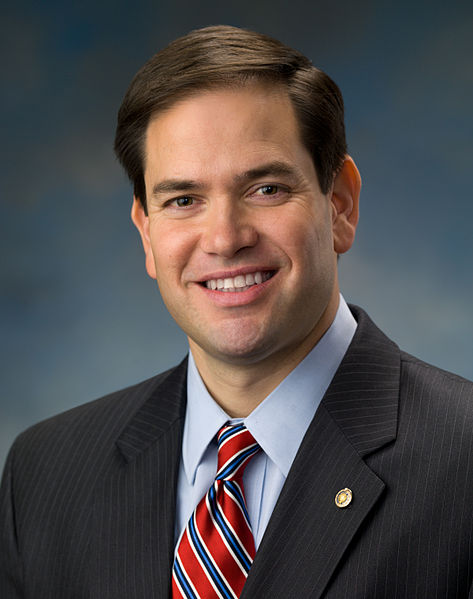