About the only thing positive anyone can say about chancletero Charlie Crist is that he is a never-ending source of entertainment. The orange-skinned flip flopper has never come across a position he cannot simultaneously and hilariously take both sides of. Crist’s latest comedic routine is now delving into the topic of Cuba, which his ignorance and lack of conviction for anything makes for very entertaining positions that are just as troubling as they are laughable. 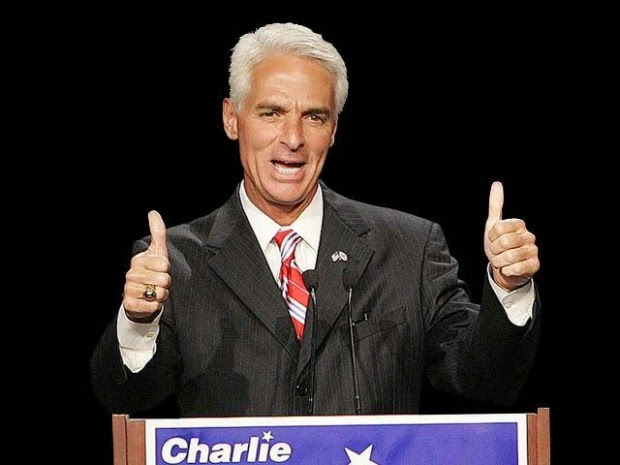 Proponents of doing business with the Castro dictatorship usually try to get around the inconvenient fact that Cuba remains designated as a “state-sponsor of terrorism” by rejecting the label altogether.

They turn a blind-eye to the Castro regime’s smuggling of weapons to North Korea; its arming, training and financing of Venezuelan paramilitary groups; its harboring fugitives of from U.S. justice, including cop-killers and a Top Ten Most Wanted Terrorist; and its continuous support for foreign terrorist organizations.

But not Charlie Crist.

In today’s Miami Herald, Charlie Crist recognizes and supports the U.S.’s designation of Cuba as a “state-sponsor of terrorism” — but wants to do business with its regime anyway.

Thus, Crist has no problem doing business with terrorist states.

He then elaborated that he sees trade and travel with Castro as “different” than with Iran and Syria. Moreover, that he wants to pursue “trade with the Cuban people.”

Crist is right that trade and travel is “different” in Cuba than in Iran and Syria.

As a matter of fact, Cuba is much more economically-repressive than Iran and Syria.

All foreign trade and investment with Cuba is solely with the Castro regime and its monopolies.

That’s why Cuba remains ranked 177 out of 178 nations in the world in the Index of Economic Freedom, a yearly joint compilation of The Wall Street Journal and The Heritage Foundation. Only North Korea is considered less economically free.

Upon learning these facts, will Tehran be Crist’s October surprise?

2 thoughts on “Charlie Crist has no problem doing business with sponsors of terrorism like Cuba: Is Iran next?”