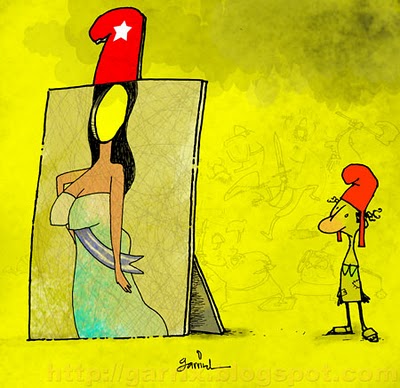 We have been exposing the farcical reforms of the Castro regime ever since Cuba’s dictatorship announced them. While the media was tripping all over itself to quote the propaganda talking points being offered by “Cuba Experts” and regime supporters here in the U.S., the rest of us knew this was just another scam by Cuba’s apartheid dictatorship to get their hands on hard currency without jeopardizing their stranglehold on power.

Yesterday, some American academics basically came to the same conclusion.

The island’s communist government “has a love-hate relationship with the private sector,” said Mario Gonzalez-Corzo, a Cuban-born professor at the City University of New York.

Ruler Raúl Castro has been allowing more private economic activities in hopes of jump-starting a Soviet-style economy since he succeeded brother Fidel Castro, temporarily in 2006 and then officially in 2008.

But while up to 485,000 Cubans are reported to be licensed to work in low value-added jobs such as tailors and seamstresses, there are many constraints, Gonzalez-Corzo told the University of Miami’s Institute for Cuban and Cuban American Studies (ICCAS).

An “onerous tax system” piles “taxes upon taxes upon taxes” that make it difficult for the new micro-enterprises and “confiscate the limited prosperity that people are generating,” he said.

The cooperative sector is not doing as well as projected by the government, Gonzalez-Corzo said. And the average bank loan approved under a micro-credit program designed to help the private sector stands at about $55.

State payrolls have been cut by 500,000 — government officials have spoken of a need to lay off at least 1.3 million state employees — but part of the drop was the result of emigration and retirements, the academic said.

Cuba now has an estimated total of $500 million in foreign investments, Quijano said, compared to $16 billion for Costa Rica and $17 billion for the Dominican Republic – two other relatively small Latin American nations.

Quijano also said there are three economic tendencies on the island: “statists” who want to largely retain the current model; “economicists” who favor some type of market socialism; and democratic socialists who favor broader use of cooperatives.

4 thoughts on “American Academics: Cuba’s ‘reforms’ not all that reforming”