For almost a year now the Castro dictatorship in Cuba has transformed Sunday from a day of peaceful worship to a day of brutal and violent repression. For forty-four consecutive Sundays the apartheid Cuban regime has dispatched its infamous, East German Stasi-trained State Security agents to violently and viciously attack the Ladies in White, an all-female human rights group that gathers together every Sunday to peacefully march to and from church services in Cuba.

If you really want to see what a War on Women looks like, just gaze 90 miles south to Cuba.

On Mother’s Day, Dozens of Ladies in White Arrested 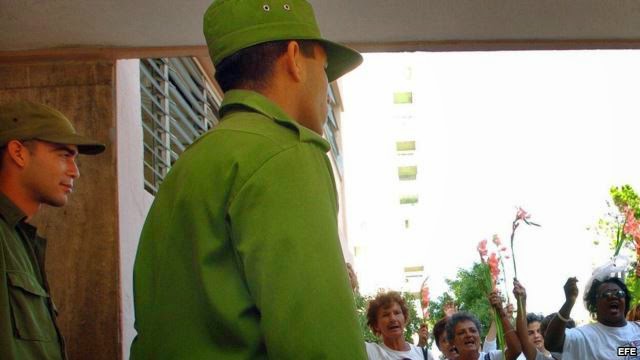 Not even for Mother’s Day did the Castro regime take a reprieve from the beating and arrest of female democracy activists, known as The Ladies in White.

For the 44th Sunday in a row, dozens of peaceful activists were beaten and arrested as they tried to gather and attend Sunday Mass.

In Colon, province of Matanzas, 13 were arrested.

In Cardenas, seven were arrested.

Meanwhile, over 20 were intercepted on the eve of Mother’s Day in Santiago de Cuba, as they headed to a gathering at the home of one of the group’s leaders. Six of them were arrested.

Finally, 17 were arrested in Palma Soriano.

The Ladies in White is a pro-democracy group that consists of the mothers, wives, daughters, sisters and other relatives of Cuban political prisoners.

Marc Masferrer has more coverage of this latest Sunday of violent repression in Cuba at Uncommon Sense.