“We talked to His Holiness of the need for free and pluralistic elections in Cuba. The Pope recognized the right of Cubans to decide.” – Rosa María Payá Acevedo, May 14, 2014 over twitter 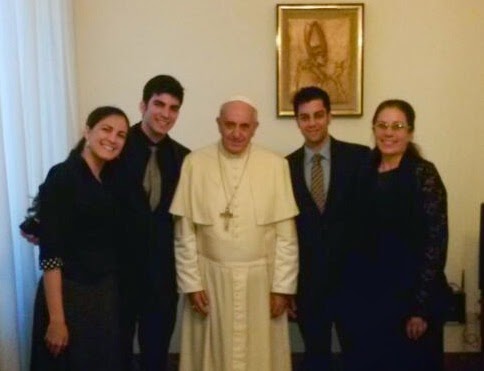 His Holiness Pope Francisco received the Payá family in a private audience at his residence, Santa Marta reported the Christian Liberation Movement in a press release. The meeting with the Holy Father took place on the morning of May 14, 2014 between 9:22 and 9:45. Ofelia Acevedo, Oswaldo J. Payá, Rosa Maria Payá y Reinaldo Payáparticipated in the gathering. The topics discussed with the Holy Father were the deaths of Oswaldo Payá and Harold Cepero; government repression especially against members of the democratic opposition; the Cuban reality and the proposed plebiscite; and the situation of the Church in Cuba.

In their official statement on the encounter the Christian Liberation Movement and Payá family expressed how “deeply grateful to the Holy Father and the Holy See grace granted and understanding found.