The Editorial Board of The Miami Herald:

Tighten the screws on Venezuela

The failure of Venezuela’s government to bargain in good faith with leaders of the pro-democracy movement strengthens the case for imposing U.S. sanctions on President Nicolás Maduro’s cronies and the beneficiaries of his corrupt regime. 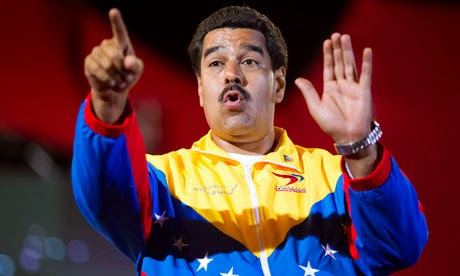 Given the government’s slide into authoritarian rule, there never seemed to be much chance that it would use the talks to engage in political healing, but opponents gave it a try. On Tuesday, however, the head of the democratic umbrella group, Ramon Guillermo Aveledo, labeled the talks a farce and said the negotiations had yielded little except insults from the government side.

And, while the government paid lip service to its supposed desire to ease the crisis, security forces stepped up political repression against its foes, and Mr. Maduro’s bureaucrats imposed new economic measures that offer fresh evidence of their incompetent management.

Police last week raided four makeshift camps in Caracas set up by anti-government demonstrators and detained 243 students. At least a dozen were charged with a variety of felonies designed to cow the protest movement. The raids came one day after the government said it would start rationing water in Caracas and electricity in western Zulia state, adding to shortages of everything from toilet paper to flour.

Three months of protests against the declining standard of living have cost at least 42 lives. Even so, Mr. Maduro apparently has decided to tough it out rather than find a non-confrontational way out of the crisis.

He has refused to make any concessions to the opposition, such as allowing the release of political prisoners or finding room for non-government members on an electoral commission. The refusal of a Maduro ally who leads the National Assembly to step down as head of the commission investigating the street clashes and political violence of the past few months was the last straw for Mr. Aveledo and pro-democracy forces.