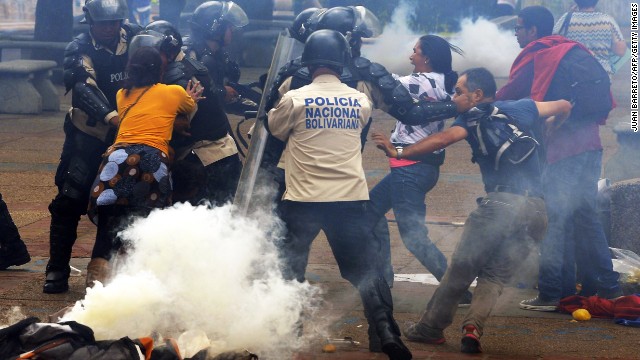 (CNN) — Images of repression and brutality against peaceful protesters demanding democracy and the elimination of corruption are not limited to Ukraine.

In our hemisphere, Venezuelans are suffering at the hands of their own government. Violence and systematic human rights abuses have resulted in 41 dead, hundreds injured, and thousands detained.

The study pulls back the veil of President Nicolas Maduro’s administration and shows its willingness to go to dangerous extremes to silence political dissent.

It depicts an unraveling situation in Venezuela far worse than suspected. The litany of rights violations is illustrated in graphic fashion: the unlawful use of force, violent mass arrests, crackdowns on free speech and press freedom, blanket denial of due process, and abuses in detention facilities, including electric shock torture.

In one instance, according to the report, a member of the National Guard “stepped on (a young protester’s) head and fired rubber bullets at point-blank range in his thigh. The shot struck a set of keys in his pocket, dispersing metal shards as well as rubber pellets into his leg.” He was then taken to a military detention facility, denied medical treatment for hours, and lost so much blood that he was near death when finally permitted to see a doctor.

While pro-democracy protesters are not fault-free in the use of violence, the primary responsibility for the horrifying, unjustified use of force rests with Maduro and his band of apparatchiks.