There are two simple yet very important requirements for doing business with Cuba’s apartheid Castro dictatorship: 1) All business agreements have to be made with the Castro regime and all monies from that business must go through them, and 2) You are required to actively and consistently parrot, regurgitate, and disseminate Castro-communist propaganda. Furthermore, neither of these two requirements are negotiable and any prospective investor looking to do business in Cuba has only two options; they either comply fully with the demands or they must forgo doing any business in Cuba.

U.S. Chamber of Commerce president Thomas Donahue is fully aware of these requirements and seems to have no issue complying with them. Immediately after arriving in Cuba yesterday he stepped up to a microphone provided by the Cuban government and began to heap praise upon the so-called reforms of the apartheid Castro regime. Using talking points provided by his Cuban handlers, Donahue shamelessly celebrated dictator Raul Castro’s “market reforms” and “free enterprise” initiatives that in reality are neither reforms nor initiatives. Unless, of course, Donahue believes Cuba’s economy can be lifted out of privation and desperate misery by shoeshine kiosks and fruit stands while U.S. businesses pump billions of dollars into the Castro crime family’s Swiss bank accounts.

I believe it is safe and fair to say that Donahue is not the dolt or the tool he appears to be. He is fully aware of what is going on and knows quite well what is expected and required of foreign investors who want to do business with Cuba’s dictatorship. Obviously, he is doing nothing more than complying with the requirements of Havana’s slave masters in his quest to get a piece of the Castro pie even if it means he has to do so on the backs of Cuba’s 11-million slaves. 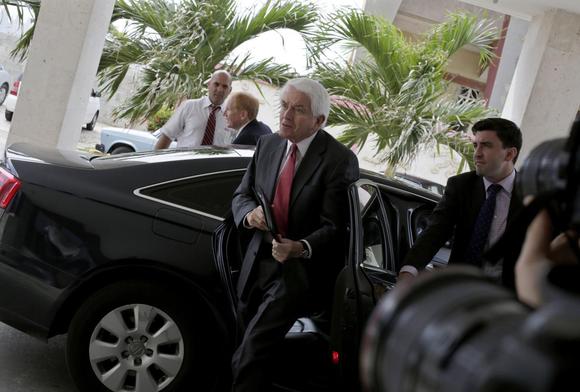 (Reuters) – The head of the U.S. Chamber of Commerce praised the growth of free enterprise in Cuba upon his arrival in Havana Tuesday at the start of a three-day visit that was criticized by a leading supporter of the U.S. embargo in Washington.

Chamber President Thomas Donohue has long opposed the U.S. trade embargo against Cuba as an impediment to free enterprise for American companies that want to do business in the communist-ruled country.

Now that free market reforms in recent years under Cuban President Raul Castro have created a class of small-business owners and private cooperatives and the government is courting foreign investment, Donohue has returned for the first time in 15 years.

“I’m here because of the evidence that we’re seeing in Cuba of an extraordinary expansion of free enterprise, the reduction in government jobs, and more private hiring, all of which is moving in the right direction,” said Donohue, whose chamber is an influential lobbying group that bills itself as the world’s largest business organization.

“As you know the chamber for years has been opposed to the sanctions as they are used,” he told reporters shortly after his arrival and before he met with Cuban Foreign Minister Bruno Rodriguez.