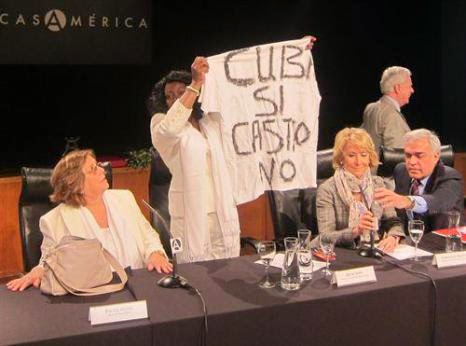 “[T]he maturing of new generations of Cubans who are less hard-line has opened the door to overhauling our relationship with a still repressive Cuban regime that has been forced to take tiny steps toward economic liberalization.”

Let’s put aside the misguided political assumption regarding the “new generations of Cubans” — an argument we’ve heard since the 1970s — for this post.

From a policy perspective — why would the U.S. want to “overhaul its relationship with a still repressive Cuban regime?”

Shouldn’t Hillary have learned this lesson from the policy overhauls she led towards Russia, Syria and Iran?

Moreover, why has the Castro regime “been forced to take tiny steps toward economic liberalization“?

Is it because they have so much money they don’t know what to do with it?

Or to the contrary — is it due to its failed policies and the crisis it faces from Venezuela’s imminent collapse?

So why would we want to bail out the Castro regime with billions in U.S. trade, tourism, financing and investment — all delivered and funneled through its monopolies?

For that’s precisely what lifting the embargo would do.

History has clearly proven that the Castro regime only makes changes when forced to — namely in times of crisis.

Perhaps Hillary (and the New York Daily News) should take note from Cuba’s courageous democracy leaders, like The Ladies in White‘s Berta Soler (below).

3 thoughts on “Hillary should say ‘Cuba Si, Castro No’”