Voters in Colombia yesterday decided to reelect Juan Manuel Santos as president on the promise of achieving — with the help of Cuba’s terrorist sponsoring Castro dictatorship — peace with the Marxist terrorist group FARC. Soon, however, they will discover that by allowing the terrorist Cuban dictatorship to broker “peace” with terrorists they themselves support, Colombians will be neither getting santos (saints) nor peace any time soon. 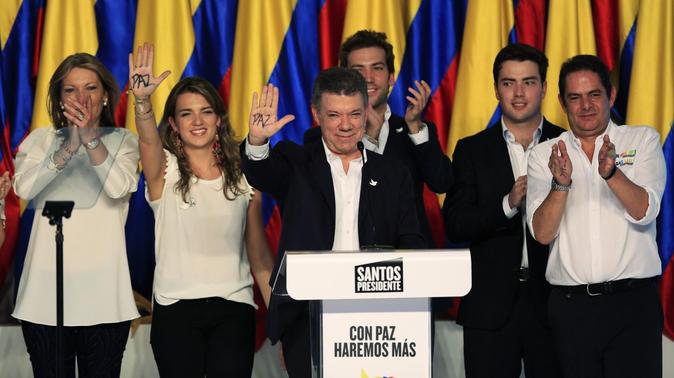 Santos, a center-rightist who has staked his reputation on securing a peace deal with the Revolutionary Armed Forces of Colombia (FARC), won almost 51 percent support in the runoff election on Sunday. His right-wing rival Oscar Ivan Zuluaga trailed with 45 percent.

The election divided Colombia between voters who support a deal to end Latin America’s longest-running insurgency and Zuluaga’s backers who want to force the rebels into a battlefield surrender.

“This is the end of more than 50 years of violence and the start of a new Colombia,” Santos said after his election victory, holding up a hand daubed with the word “peace” and wearing a trademark pin of a white dove on his lapel. “A Colombia at peace with itself.”

Santos opened talks with the FARC in late 2012. The conflict has killed over 200,000 people and forced millions more from their homes.

Last week, Santos also revealed preliminary talks with a smaller rebel group, the National Liberation Army (ELN), and he said on Sunday the Colombian people were now insisting on peace.

“The demand is not just for the government. Today’s message is for the FARC and the ELN and it’s a clear message – this is the end,” the center-right president said surrounded by family.

1 thought on “Voters in Colombia choose Santos and Cuba-brokered ‘peace,’ will soon discover they will get neither”