” I know that what the tyranny is worried about is that I won’t go away, and will continue talking. Today I alert the world that my life is more in danger than ever.” –  Jorge Luis Garcia Perez “Antúnez” June 13, 2014 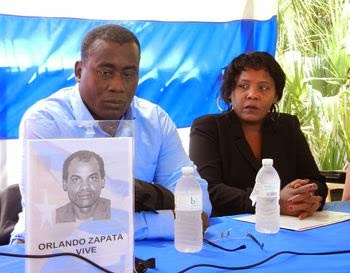 Resistance activists Jorge Luis Garcia Perez “Antúnez”, National Secretary of the National Resistance Front Orlando Zapata Tamayo and his wife Yris Tamara Pérez Aguilera, leader of the Rosa Parks Women’s Movement have been re-arrested this time on Sunday night while out for a walk, according to the testimony of a neighbor who was an eyewitness to the facts, Donaida Paceiro Pérez, a Rosa Parks Movement activist, broke the news to the Cuban Democratic Directorate in a phone call:

“I went to the PNR (Revolutionary National Police) unit in the municipality of Placetas, from where I am speaking to learn about the arrest of this brother and sister and the state security official called “Reinier” tells me that these activists will be processed by justice without say anything more, or give me another reason. When I ask him again, he answered me and repeated that they would be prosecuted and did not know how long they would be there, because he did not know, he had nothing to do with it, he had to wait for orders from the high command, “said Paceiro Pérez.

“Antúnez” and his wife Yris had their home raided at 6am last Wednesday, June 11, 2014,  and they were grabbed out of bed, handcuffed and taken to be interrogated. They were released on the morning of Friday, June 13, 2014 and Antúnez made a statement where he denounced being beaten up, choked into unconsciousness on two occasions and “revived” with injections of an unknown substance.