By Gladys Linares in Translating Cuba:

Many Havana streets barely have any pavement. The drains are clogged. With the rains the overflowing sewers allow sewage out. They try to justify these difficulties with the Special Period, everyone knows that the neglect began in 1959. 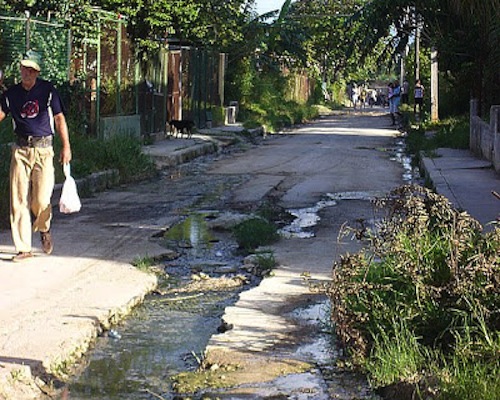 Cubanet, HAVANA, Cuba, June 13, 2014 — We residents of the capital have seen how the streets and avenues have been deteriorating for more than 50 years, arriving at the critical situation in which they are today. Although roads are an expensive activity, and the government says it has assigned millions to the rehabilitation of the capital’s main arteries, if a profound drainage restoration is not undertaken, the situation, which is critical, the problem of the floods, as well as the sewer water in our streets, will not be resolved.

The sewer system was designed for a certain number of residents, but Havana’s population has been growing by leaps and bounds, and this creates difficulties. A few days ago through the media it was announced that the government was engaged in improving the capital’s pipeline system.

Barely two years ago the official media released a lot of propaganda about the repair of the avenues, among them Calzada de Dolores, Lacret, Porvenir, Diez de Octubre. But, as is already customary, these jobs were not well done, and a few days ago it made headlines again that the avenues already need new repairs.

Today many city streets are practically back roads, full of dirt, because there is barely any pavement left. The drains are clogged, and as the sewage system networks are not rehabilitated, when heavy rains flood the streets, the overflowing sewers allow sewage waters to get out. Although there is an effort to justify these problems with the Special Period, everyone knows that the neglect dates from 1959.

Many Havana neighborhoods exemplify this reality. To just mention one, in Santos Suarez, Diez de Octubre municipality, in Rabi and Enamorados streets the situation is critical. But that is not the only place where this occurs. Today Ricardo, a young man who lives on Lagueruela street in Lawton, told me that his patio was full of dirty water that smelled like a grave, and that as the downpour got worse, more came out and ran through the halls towards the street. Also the neighbor, an older lady, called him, startled because water was coming out of her bath drain.

For some time, some people have been removing the drain covers when the streets flood. They think that this way the water will drain faster and so they will prevent the flooding of their houses. But as these grills almost always are in the middle of the streets, this constitutes a danger not only for the pedestrians who try to cross the streets, but also for vehicles like bicycles and motorcycles. Jorge, a neighbor, tells me that recently a man caught his attention and directed him to call the high pressure truck that extracts black water, and he looked at him mockingly and shot back: “Buddy, that truck is a ghost!  I’m tired of calling it and it not coming!”