By Justin Price in The Washington Free Beacon: 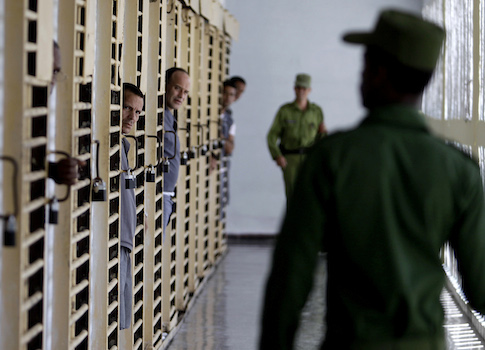 A recent wave of governmental threats and attacks on Cuban journalists has led to heightened concern among human rights and press freedom advocates.

Last week, Cuban journalist Roberto de Jesús Guerra Pérez alleged that on June 11 a government agent beat him as he waited outside the Czech Republic embassy in Havana to connect to the Internet.

“An unknown man intercepted and attacked Guerra without warning, punching and kicking him in his head and face, and leaving him with a broken nose, as well as cuts, scrapes, and bruises all over his body,” according to the Human Rights Foundation (HRF).

Guerra is the founder of Centro de Informacion Hablemos Press (CIHPRESS), an online news site critical of the Cuban Government that frequently publishes stories on the affronts its reporters encounter.

Roberto Gonzalez, a legal associate with HRF, was in contact with Guerra following the beating.

Gonzalez told the Washington Free Beacon Guerra had gone to the police and filed a complaint after the event.

Gonzalez said Guerra identified the man who beat him outside the embassy as a state agent. Four others on two motorcycles showed up during the thrashing—one urging the assailant to cease.

According to Gonzalez, the aggressor finally stopped, then told Guerra, “This is so you know what we do to dissidents.”

Guerra had received various threats of violence over the phone the day leading up to the incident and many times before, Gonzalez said.

On the day of the assault, CIHPRESS published an article regarding three of its journalists, including Guerra, whose phones had been blocked by the state-owned cellular service provider ETECSA as part of a campaign against members of the island’s media who criticize the government.