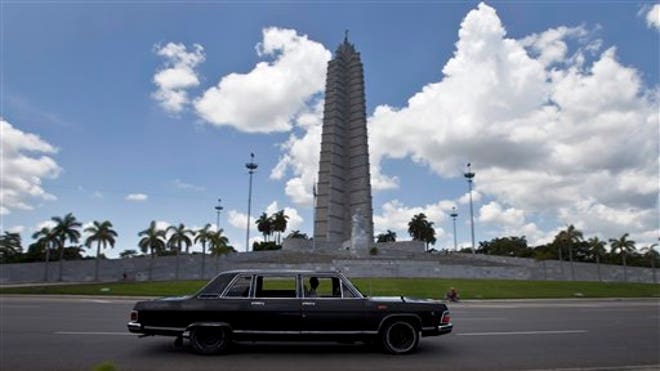 There have been several news stories these last couple of days reporting that a taxi company owned by the apartheid Castro regime is now offering tourists visiting Cuba a ride in one of Fidel Castro’s former limousines. Naturally, the press is going wild over the prospect of taking a ride in a “piece of history” and plenty of tourists vacationing on Cuba’s island slave plantation have taken advantage of the perceived opportunity to ride in the same car that once chauffeured around a historical figure.

But as it is always the case when you are dealing with the criminal Castro dictatorship, the claims made by the regime are always far far away from reality. It turns out Fidel has never set foot in these limos being rented out to tourists at exorbitant rates. However, the regime’s tourist propaganda campaign calling them “Fidel’s Limos” has not only enticed ignorant tourists vacationing on the island to shell out large amounts of cold hard cash to the apartheid regime, it has also netted them plenty of free publicity.

Café Fuerte has the report (my translation):

News reports about the introduction of old Soviet vehicles used as taxis in Havana that were presumably used by former leader Fidel Castro became a viral topic this Saturday on social networks and received extensive coverage in the U.S. media, including Miami, obviously.

Nevertheless, the information reported is inaccurate and looks more to be part of a publicity campaign by the state-owned company CubaTaxi to elicit interest in tourists currently visiting Cuba. I can categorically confirm that the ZIL automobiles being hired out in Havana at a rate of $100 to $140 per trip were not used by Castro.

If you look at photos of the same model of automobiles used to transport Castro, you will find clear differences with the limousines that are currently being rented out to tourists to tour the Cuban capital. Certainly, many of these automobiles now being used by CubaTaxi could have been part of a fleet that served the Protocol Services arm of the Ministry of Foreign Relations, but they were not used by Security Personnel to transport the Cuban leader.