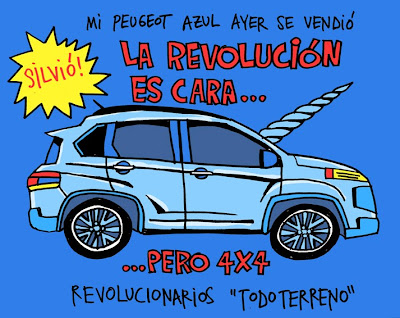 The explosion of car sales in Cuba has the apartheid Castro dictatorship celebrating in Havana. The repressive and criminal regime run by the Castro family mafia has just announced their fledgling car sales venture that started just six months ago has succeeded beyond their wildest dreams. According to their own figures, the auto-sales arm of the Castro crime family sold a whopping, jaw-dropping, astounding, eye-opening 50 cars in the past 6 months!

And if that volume of car sales in a nation of 11-million+ people is not enough to elicit pure awe from any impartial observer, think about this: The Castro mafia managed to sell a colossal 50 cars at an average price of $23,800 in a country where the average Cuban slave makes about $240 a year. Talk about salesmanship!

Via the AP in ABC News:

Just 50 automobiles and four motorcycles have been sold in Cuba in the nearly six months since a new law took effect that let islanders buy vehicles from state-run dealerships without a special permit for the first time in decades, authorities said Monday.

Sales totaled about $1.3 million, government news website Cubadebate reported, for an average of some $23,800 per vehicle.

About 11 million people live in Cuba.

Many Cubans were delighted when the new rules were announced in December — and then left aghast by the sticker prices once they took effect the following month.

The licensed dealerships also sell used cars for significantly less, often former rentals with high odometer readings. These would appear to account for most or nearly all the sales reported by Cubadebate.

But even cheaply made Chinese sedans decommissioned from government fleets list as used cars for well above what they command elsewhere brand-new.

The prices were the subject of bitter and open complaint by many Cubans, most of whom earn about $20 a month working for the government.

Before January, islanders who wanted to purchase a vehicle had to acquire a “letter” of permission. The privilege was granted to the likes of diplomats, technicians, doctors and others who served on foreign missions and returned with hard currency saved up overseas.

Cubadebate said authorities intend for 75 percent of income from automobile sales to be invested in public transportation.