“But men often mistake killing and revenge for justice. They seldom have the stomach for justice.” – Robert Jordan 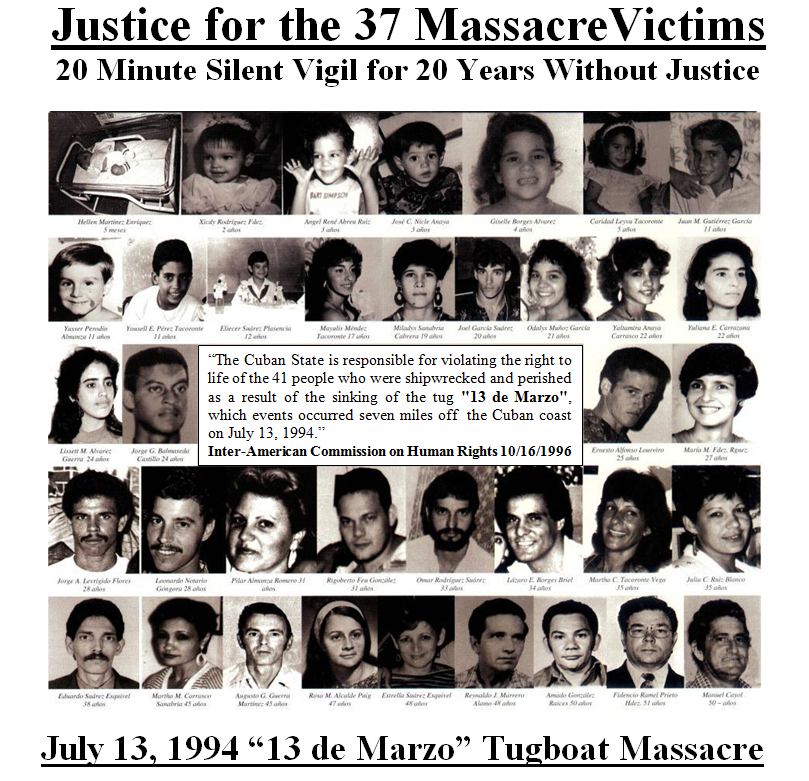 The attack on and sinking of the”13 de Marzo” tugboat in the early morning hours of July 13, 1994 is probably one of the worse crime committed by the Cuban government under the rule of the Castro brothers and it is definitely the best documented and widely recognized by international human rights bodies and is referenced in books on international law.

However, after twenty years it has been largely forgotten (outside of the Cuban diaspora). The last time a national audience in the United States heard anything about this incident was during Pope John Paul II’s visit to Cuba in 1998 when Ted Koppel’s Nightline did a story and interviewed survivors and family members. Koppel in his program explained how the mainstream media reacted to the massacre:

“Three and a half years ago, in the summer of 1994, something terrible happened out there, seven or eight miles out at sea, off the northern coast of Cuba. it was an incident that went all but unnoticed in the US media. The Cuban-American community protested but they protest a lot and as I say, we in the mainstream media all but ignored it. The Vatican, however, did not.

Today this crime is absent from the public conversation on Cuba. It is important that it not be forgotten by the general public, remaining a painful memory among Cubans,  and that the demands of justice for the victims and their families not be ignored.