Yesterday marked the 52nd consecutive Sunday where the Ladies in White were violently attacked and arrested by Castro State Security while attending Sunday worship services in Cuba. This is the regime that the “Cuba Experts” tell us is changing for the better. This is the vile dictatorship being promoted as benevolent by Castro supporters here in the U.S. through propaganda campaigns in newspapers and subway stations.

For the Ladies in White, however, the only change they see in Cuba is the date on the calendar when they are viciously and brutally attacked by Castro thugs.

Over 100 Ladies in White Arrested Today 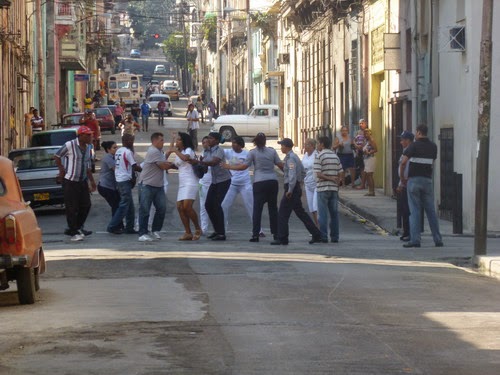 Over 100 members of The Ladies in White were arrested today in Havana, Santiago, Matanzas, Guantanamo and Holguin, as they tried to attend Sunday Mass.

According to their leader, Berta Soler, over 50 were arrested in Havana alone.

The Ladies in White are a pro-democracy group composed of the wives, daughters, sisters, mothers and other relatives of Cuban political prisoners.

In two particularly egregious cases, Cira Vega de la Fe, the 75-year old aunt of Hortensia Alfonso Vega, a member of The Ladies in White, was intentionally hit by a police vehicle as she headed to the station in Cardenas to inquire about her niece’s imprisonment. She suffered various injuries.

Meanwhile, Yida Hernandez Pena, a member of The Ladies in White in Holguin, was knocked off her bicycle by a state security vehicle, as she made her way to Mass.  She was hospitalized with head injuries.

Additionally, over a dozen activists from the Cuban Patriotic Union (UNPACU) were arrested today, including its co-leader, Felix Navarro.

Also arrested was the President of the Association of Independent Cuban Educators, Roberto Lopez Ramos.