Via 14yMedio in Translating Cuba: 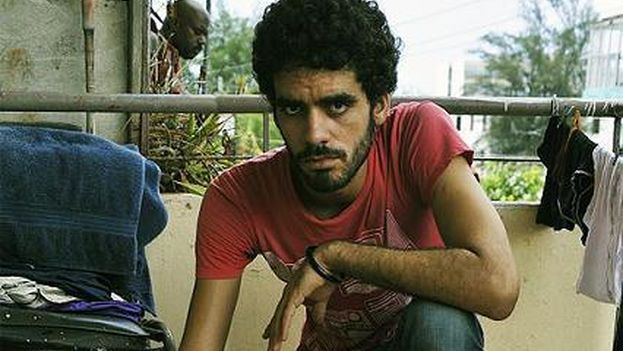 14ymedio, Havana, 9 July 2014 – The graffiti artist Danilo Maldonado, known as “El Sexto” (The Sixth), has been in custody for five days charged with “violation of domicile and injury” and will be prosecuted, according to several friends and Cuban activists. Interviewed by the newspaper just two weeks ago, the artist is being held incommunicado and will be tried this week, according to reports from his family on Wednesday.

This newspaper was able to contact the photographer Orlando Luis Pardo Lazo who, in speaking of El Sexto, said, “he has no attorney, no money, no one left free in Cuba who is able to help him.” The young man has spent several years in the sights of the Cuban political police for a series of graffiti and expositions where he questions the powers-that-be and gives voice to outlawed civil society. His friends believe this could be a “settling of accounts.”

Several witnesses say that a domestic incident and a complaint from the father of El Sexto’s wife have “served as a reason for the police to charge his and to remove him from the streets where he realizes his art.” There is still no official version of events and the authorities are not providing clear answers to the several phone calls made to investigate the situation of the detainee.

In late 2012, the writer Angel Santiesteban Prats was convicted on similar charges and still remains an inmate of a forced work center on the outskirts of Havana. As a general rule, people critical of the government are not judged on political grounds but rather for “common crimes” with the objective of reducing solidarity and international pressure.