The ongoing betrayal of the Cuban people by Cuba’s corrupt and compromised Catholic Church. 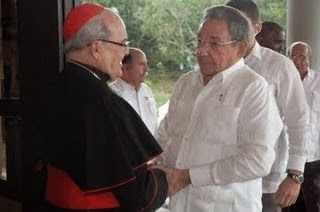 Espacio Laical had been considered one of the very few “tolerated” non-state publications in Cuba.

Its editors, Roberto Veiga and Lenier Gonzalez, cited pressure from inside the Catholic Church as the reason for their departure.

What’s fascinating is that it was Veiga and Gonzalez who introduced the controversial, insulting and illogical (in the context of a totalitarian dictatorship) concept of a “loyal opposition” in Cuba.

Yet apparently, even a “loyal opposition” is too much for Cuban Cardinal Jaime Ortega.

To Castro’s liking, Ortega seems to prefer “no opposition” at all.