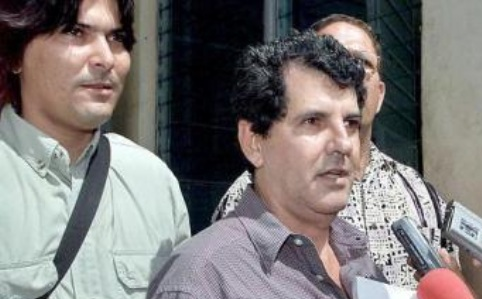 On July 11, 2014 former Cuban prisoner of conscience and Christian Liberation Movement spokesman Regis Iglesias Ramírez over twitter quoted his late mentor Oswaldo Payá Sardiñas: “…a few miles from our sea wall the tugboat 13 de Marzo was criminally sunk. Yes, a vessel…” and posted a link to an article the martyred Cuban opposition leader had written in on May 31, 2000 titled “Moral Hemiplegia and Savage Communism.”

The article was a response to Adolfo Pérez Esquivel and other foreigners including Gladys Marín, of the Chilean Communist Party, who had publicly expressed that the resolution passed by the UN Human Rights Commission that recognized human rights violations in Cuba was unjust. In his response the Nobel Prize nominee offered an overview of the human rights situation on the island and contrasted knowledge of the missing in Argentina compared with that of the victims of the “13 de Marzo” tugboat massacre stating:

“I feel particular respect for the grandmothers of the Plaza de Mayo, who are a living testimony of one of the most ruthless horrors committed in our continent. Their voices are a summons to all; no one can be oblivious or neutral to their just demand. But with the same respect I have to say that for many Cubans it was sad contrast to hear how your president was unaware of our reality. I don’t think I am mistaken in saying that Ms. Carlotto is unaware that just a few meters from the podium where she participated begins the sea, and a few miles from our sea wall the tugboat 13 de Marzo was criminally sunk. Yes, a vessel where several dozen fleeing men, women and children were chased and caught by government vessels. After being stopped and surrendered, they started to attack and mow down the people with very powerful jets of water. Jets of water tore children from their mothers’ arms; they asked for mercy, but it did not stop this genocidal and sadistic orgy. Two dozen children and another two dozen adults perished. There they are, they are not missing – we all know where they are – accusing from the bottom of the sea, in front of our Morro Castle, their murderers and the government that placed them in the category of “heroes” the authors of this deliberate and premeditated genocide.”

The article concludes with two paragraphs: the next to last paragraph challenging the Argentine human rights defender and pacifist to a public debate on the human rights situation in Cuba.