Wave some bloodstained cash around and the usual suspects will crawl out for a taste. 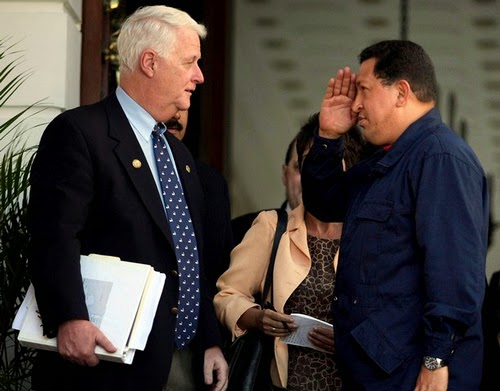 After being outed last month for unregistered lobbying activities, two New York-based PR firms — MCSquared and Fitzgibbon Media — have filed documents with the U.S. Department of Justice admitting to their representation of Rafael Correa’s government in Ecuador.

For these PR efforts, the Ecuadorian government paid over $6.4 million.

According to new documents filed, Delahunt will help the Correa government coordinate “meetings with U.S. government officials and assisting with media efforts, aimed at enhancing the U.S.-Ecuadorian relationship and raising issues of importance to Ecuador as they relate to bilateral U.S.-Ecuador relation.”

He’s previously come under criticism for his activities on behalf of the Venezuelan government.

Most recently, Delahunt has led a lobbying effort seeking U.S. approval of products from Castro’s Center for Genetic Engineering and Biotechnology (CGEB).

If ALBA is in trouble, call Delahunt to the rescue.