“I’d rather explain to my children why I am a prisoner, then to explain to them why they have NO COUNTRY.” – Leopoldo López Mendoza on June 2, 2014 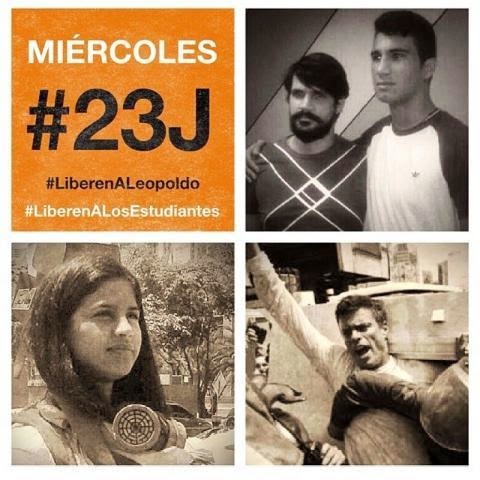 Merriam-Webster has two definitions for a show trial

: a trial in a court of law in which the verdict has been decided in advance.

: a trial (as of political opponents) in which the verdict is rigged and a public confession is often extracted

Opposition leader Leopoldo López and four students: Marco Coello, Christian Holdack, Demian Martín, and Ángel González are being subjected to a political show trial. The verdict has been decided in advance and can only be altered by political considerations due to changing circumstances that impact the executive branch. Judicial independence and the rule of law are non-existent in Venezuela. This “trial” is an exercise in power politics and public relations.

However in this rigged trial a confession has not been extracted. At the end of the hearing today Leopoldo López reiterated that he did not have confidence in the judiciary and that he “is kidnapped” and petitioned for the students to be freed. Leopoldo went on to say “It is a political trial because on at least 16 occasions Maduro threatened me that I had to go to prison and February 12 was only an excuse.”