But of course, what do the Ladies in White know about Cuba? Hillary Clinton is more likely to take the advice of American “Cuba Experts” who coincidentally just happen to have business interests with the apartheid Castro regime than to a bunch of women who live on the island risking their lives every day for liberty and freedom and can’t make contributions to her campaign.

The Ladies in White Respond to Hillary’s Cuba Comments 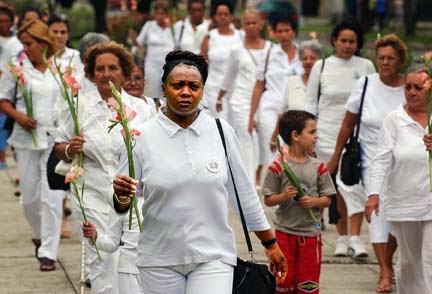 In a Univision interview this week, former U.S. Secretary of State Hillary Clinton repeated the assertions made in her book, “Hard Choices,” about ending the Cuban embargo.

(As an aside, Hillary’s position was thereafter celebrated by Castro’s state media.)

During the interview, Hillary also expressed her support for expanded travel to Cuba and to visit the island herself someday.

In response, Berta Soler, leader of the Cuban pro-democracy group, The Ladies in White, stated today:

“With all due respect to Secretary Clinton and any others who may share her opinion, Cuba is not an island of pleasure. It’s an island drowned in misery, hunger and necessity due to the Cuban government. It’s a suffering island.”

“The Ladies in White are not in favor of easing or removing the conditions of the commercial embargo that the government of the United States has towards the government of Cuba, nor the relations among governments. Why? Because the Cuban government shouldn’t be given oxygen.”

The Ladies in White is a pro-democracy group composed of the wives, daughters, mothers, sisters and other relatives of Cuban political prisoners.