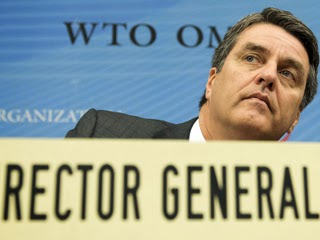 Here’s another case study of how the Castro regime uses blackmail to achieve its propaganda goals.

Last month, the World Trade Organization (“WTO”) was set to ratify an international Trade Facilitation Agreement (“TFA”) that would have streamlined customs procedures and added over $1 trillion to global GDP.

WTO ratification requires the unanimous approval of all 160 member states.

Yet, at the very last minute, India controversially objected over a non-related food subsidy issue.

Never missing an opportunity to coerce a concession, Cuba, and its two minions, Venezuela and Bolivia, thereafter joined India in its non-related objection.

Note that every other WTO member, including China and Russia, had supported the deal.
Failure to ratify the TFA has put the entire existence of the WTO at risk, which is seen as increasingly irrelevant and ineffective.

Thus, like clockwork, the WTO’s Director General, Roberto Azevêdo, flew to Havana this week, where he participated in highly-publicized meetings with Castro regime officials and even toured the new (and underutilized) Port of Mariel.

And predictably, he criticized U.S. policy and gave Cuba’s desperate search for foreign investors — despite no property rights or rule of law — a begrudging seal of approval.

“There is a need to capture foreign investors, and it seems to me that Cuba is in the process of finding its recipe,” Azevêdo told journalists during his visit.

[As Castro knew,] whatever it takes for a global trade deal.

1 thought on “How Cuba’s Castro dictatorship blackmails the WTO”