Mercedes Alvaro and Dan Molinski in The Wall Street Journal: 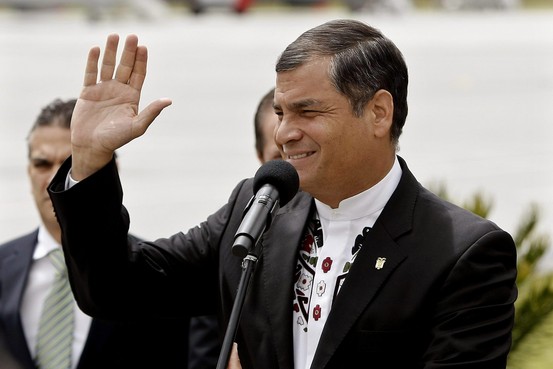 QUITO, Ecuador—President Rafael Correa, in speeches and televised interviews, assures followers he’d like nothing more than to step aside when his current term ends. “The easiest thing would be for me to retire in 2017 as one of the best presidents in our history, as the people refer to me,” he said in a recent televised interview.

But Mr. Correa, whom opponents characterize as a semi-authoritarian leader who controls all levers of power, has other plans. Ecuador’s Constitutional Court, whose judges are allied with the president, is now deliberating a proposal by the ruling Alianza Pais Party to permit indefinite re-election for every office-holder. The justices are expected in the days ahead to forward the proposal on to Congress, where Alianza Pais has a strong majority and is expected to pass the new law sometime next year.

Still popular after seven years in office, Mr. Correa, who is 51 years old, would likely win a fourth presidential election in 2017 and remain in power far into the future, analysts and opposition figures believe. Buoyed by high oil prices, Mr. Correa has funneled money into education and highways, giving him high approval ratings, while drawing sharp criticism from rights groups and press freedom advocates for trying to muzzle critics.

“The yearning of all autocrats is to stay in power for life, and that was Correa’s plan from the start,” said Osvaldo Hurtado, a former president of Ecuador.

In speeches, Mr. Correa has rejected accusations that he is trampling on Ecuador’s democracy, arguing instead that the people shouldn’t be deprived of their democratic will. Extending his presidency, he said, would thwart his foes’ plans to end his so-called Citizen’s Revolution, which is intended to remake this country of 16 million.

“My sincere position was always against re-election,” he said in a nationwide address in May. “But after deep reflection, and well aware that sometimes our choices are between the lesser of two evils, I’ve decided to support this initiative.”

Brash, charismatic and vocally opposed to U.S. foreign policy, Mr. Correa is seen by some as the region’s natural heir to late Venezuelan President Hugo Chávez, who died of cancer last year. Mr. Correa has demolished opponents at the polls, just as Mr. Chávez did. Faced with a weak opposition, he has become a phenomenon in Ecuador—a chronically unstable country until he came to power.

Latin American allies of Mr. Correa—politicians who form the vanguard of what they call 21st Century Socialism—have also extended their presidencies. Mr. Chávez did so when voters abolished term limits in 2009. Nicaragua’s congress in January passed a law permitting President Daniel Ortega, who took office in 2007, to also run indefinitely. In Bolivia, President Evo Morales is also planning on staying in office longer, running for a third term in October, after being permitted to do so by the Supreme Court.

“With the judge, the courts and all the players on their side, the leaders of so-called 21st Century Socialism are imposing authoritarian regimes, backed by the votes of their own citizens, and are undermining democracy,” said Antonio Rodríguez Vicens, a constitutional lawyer in Quito.

The proposal to allow for indefinite re-election in Ecuador depends now on the Constitutional Court, which is to rule on whether a popular referendum is needed to change the law or whether it should go to Congress for a vote. Political analysts say there is little doubt that the court, which favors Mr. Correa in its rulings, will send the measure to Congress. And with 100 of 137 lawmakers in the ruling party, analysts say, Congress would almost certainly approve indefinite re-election sometime next year.

“If the country is moving adequately, why not open the door to the possibility of continuation?” said Miguel Carvajal, an Alianza Pais lawmaker. “The achievements are because of the president, and his team and the people.”

The man who would be president far into the future is, in many ways, a study in contradictions.

His government’s embassy in London has offered refuge to WikiLeaks founder Julian Assange, even as press freedom groups say he cracks down on the media here. He professes support for the poor and marginalized, but Indians protest his government for opening up tribal lands to oil exploration.

Mr. Correa, with his tough anticapitalism rhetoric, can also send shivers down the spines of business owners.

But in June, Ecuador made a successful return to international capital markets by selling a hefty $2 billion in 10-year bonds, just six years after defaulting. Economic output here has also grown by an average of 4.3% annually since Mr. Correa took office in 2007, while his allies in Argentina and Venezuela have seen their economies founder.

Factory owner Victor Navas said the government requires Ecuadorean plants to buy or produce more locally manufactured machinery and parts, rather than to import. “But at the same time, the government provides certain tax benefits or tariff discounts to offset regulations that may be costly,” he said.

“Unlike Chávez, he knows the importance of infrastructure, roads, and schools, and Ecuador has seen a vast improvement in these areas,” said Michael Shifter of Inter-American Dialogue, a Washington think tank.

More controversial have been his relations with the press and civil society groups. Last year, his supporters passed a communications law that mandates criminal charges if media outlets don’t report news in ways regulators deem fair and balanced.

The government last year also announced new restrictions on civil society groups that activists say threaten their work. Pachamama, an environmental organization that is allied with indigenous communities, was closed after being accused of stirring protests.

“This is a message saying there’s no support for indigenous people,” said Patricia Gualinga, an indigenous leader from the Kichwa community, “and it gives free rein for entering our territory to develop mining and drilling activities.”

Such criticism, though, has done little to blunt Mr. Correa’s popularity, which tops 61%, according to the latest Cedatos-Gallup poll, released in June.

He has a televised show in which he is the star attraction. He sings folk songs, orders his ministers to fix problems and heaps scorn on the press, enthralling supporters. But voters also say he has delivered: Poverty has fallen to 26% from 38%, as he has diverted money toward social programs and health care.

“The president has helped us a lot,” said Mariana Narvaez, a 66-year-old housewife who received a free operation to fix fading vision. “If he is candidate again, of course, I’ll vote for him.”

Write to Mercedes Alvaro at mercedes.alvaro@wsj.com and Dan Molinski at Dan.Molinski@wsj.com