In a feat unseen since the first two decades of the XIX century the Venezuelan Bolivarian Chavista Army has gone on the offensive and decided to dispose of this major threat to our nation: smugglers. No expense should be spared as these people have been able to smuggle away 40% of our food without no one noticing for months of “economic war”. But guided by Maduro and Fidel, the glorious revolutionary army has opened its eyes and from the twitter of the commander in chief himself we get accounts from the glorious battles fought. Next, choice tweets from Vladimir Padrino account with my most admiring appreciation.

Of course, we need to start from the field command, on top of a hill as it should. Apparently from this exquisitely chosen strategic position many smugglers path are visible and are being destroyed under the keen supervision of the fat robust generals, a wonder to all. You may appreciate the latest fashion in bullet proof jackets which I am sure were an urgent necessity on top of that hill as we can see from the very anxious facial expressions. 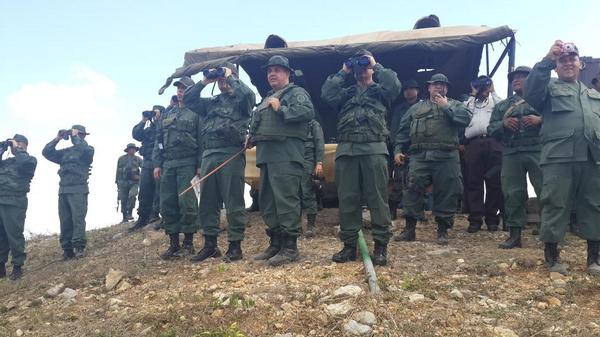 And what are they catching?