History has never been on the side of those who continue to defend the indefensible atrocities of Cuba’s murderous apartheid dictatorship. But that has never stopped the vile regime’s supporters from doubling, tripling, quadrupling, quintupling, sextupling (and on and on) down on their bloody failures.

The Problem With Regurgitating Castro’s “Statistics” 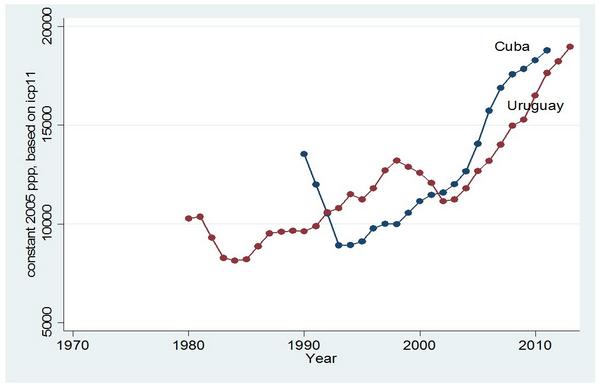 This week, the Inter-American Dialogue, along with the Organization of American States (OAS) and the CAF development bank, hosted their annual conference on hemispheric affairs.

As expected, they hosted a panel on Cuba with the usual cast of characters — an official Castro regime academic, along with the same old anti-sanctions lobbyists from the Brookings Institution, the Carter Center and the Cuba Study Group.

And, of course, nothing can be expected from the OAS, which recently spared no effort to silence Venezuelan opposition leader and legislator, Maria Corina Machado, from denouncing the authoritarian practices of the Maduro government.

Let’s just say diversity is not their strongest suit.

These Cuba panelists spewed all sorts of numbers and percentages — with absolutely no evidence of their veracity — other than what they read in Granma or Juventud Rebelde.

The greatest irony was provided by a panelist from the World Bank, who criticized the United States for supposedly wanting democratic reform to precede economic development — rather than vice-versa.

First, this World Bank bureaucrat is obviously unaware of U.S. law and policy toward Cuba. The U.S. indeed wants to see democratic reform in Cuba — it’s in our geopolitical interest — regardless of whether it’s before or after economic development.

However, the fact remains that the historic subsidies Cuba received from the Soviet Union (more than all of Europe under the Marshall Plan); its current subsidies from Venezuela, which equal or surpass those of the former Soviet Union; and the tens of billions in Canadian and European tourism, trade and investment over the past two decades, have not led to economic development (let alone democratization) in Cuba. They have gone to Castro’s monopolies. Thus, the U.S. should not follow suit.

Moreover, the old “modernization theory” — development first, then democracy — no longer has any credence in political science (courtesy of China, Vietnam and oil dictatorships throughout the world). There is simply no empirical evidence to support this theory — to the contrary.

The irony is that while this World Bank bureaucrat argued such nonsense, his institution just published — for the first time — GDP numbers in PPP (“purchasing power parity”). The Cuba figures are laughable.

(Below are some tweets from economist Branko Milanovic highlighting some of these.)

For example, the World Bank holds (based on Cuba’s “statistics”) that Cuba’s GDP (in PPP terms) is higher than Uruguay’s.

And that Cuba is the 8th richest country in Latin America — just below Chile, but richer than Uruguay, Panama, Colombia and Argentina.

Then why is Cuba the most non-democratic and repressive country in the Western Hemisphere?

Needless to say, this World Bank bureaucrat either doesn’t believe his own data or his own theory.

But those are the silly contradictions faced when relying on — and regurgitating — Castro’s statistics.