“Worse than a crime, a mistake” 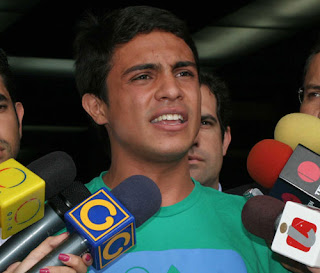 We just learned that Lorent Saleh, a vociferous student activist against the Chavez regime has been expelled from Colombia to Venezuela. I have no doubt that Lorent Saleh crossed the line in Colombia on what political activities a foreigner can undertake there. I am certain that there might be justified reasons for the Colombian government to ask him to leave the country.

But there is ABSOLUTELY NO EXCUSE for the Santos government to expel him to Venezuela where Lorent Saleh is subjected to political persecution.

What Colombia should have done is to arrest Saleh and give him and his lawyers a few days to find a suitable place of exile. And even if no country wanted Saleh, there was still the option to keep him in jail in Colombia; or to assign him to a given sector with formal restrictions that if he were to break would mean instant deportation to Venezuela, his country of citizenship.

Why has Colombia done that? And I stress the title, worse than a crime, a major political mistake for Santos (attributed to Talleyrand when Napoleon had the duke of Enghien summarily executed).

I think that Santos is mired in a peace process that from here looks like going nowhere good. And this without the need to pay attention to Uribe’s screams. Santos has reached a situation where after a difficult reelection that was gained from the left, far from his natural base, he has to pay the piper. And the piper is Venezuela (directed by Cuba) which will or will not allow the FARC to survive the peace process to be able to come back violently whenever it is convenient for them.

As a button I can also bring forward the promotion of deeply discredited ex Colombian president Ernesto Samper to the UNASUR chair. He hurriedly offered his services to rekindle the dialogue in Venezuela. He went as far a saying that Maduro is a man of dialogue, a man of peace.  This proves that any mediation Samper may offer is a waste of time for the Venezuelan opposition. Clearly Samper is pro status quo in Venezuela. The other explanation, that Samper is woefully misinformed, cannot hold, of course, considering that he is an ex president that has tirelessly worked at remaining relevant in Colombia in spite of all the charges associated to his presidency, involving drug traffic which is akin as involving the FARC.

No, the reason why Samper is UNASUR head is that UNASUR needs to keep inside Colombia to remain relevant (I think that ship has sailed…). Also, now that Santos is about to give a chance to the FARC to become a political force that could eventually win elections in Colombia, the left in power from Buenos Aires to Caracas  want a Colombian like Samper to be anything from the useful idiot to the active collaborator.

Thus, from the deportation of Saleh to the meddling of Samper (who I personally totally mistrust) there is a clear pattern emerging: Santos desperately seeks the help of the Venezuelan regime to complete his negotiations with the FARC, almost at any price it seems.  It also becomes awfully clear that the Colombian intelligentsia could not care less about the future of Venezuela, that it may even bet on its collapse to see what juicy morsel Colombia can pick for nearly free out of the debacle.

Or Venezuela and the FARC may prevail.

Crimes and mistakes. All.

1 thought on “Reports from Cuba’s Venezuela: ‘Worse than a crime, a mistake’”