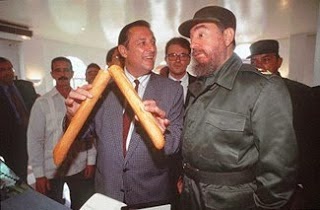 Some foreign businessmen only learn the hard way.

Confiscations are still the norm in Castro’s Cuba — only the modus operandi has changed a bit.

Here are recent quotes from some of Castro’s largest (and now former) business partners in the transportation, tourism and food sectors:

I wouldn’t recommend anyone go to Cuba to invest.

— Lee Hacker, Vice President for Finance, Canada’s Tokmakjian Group, whose CEO was just handed an arbitrary 15-year prison sentence and had all of its assets confiscated in Cuba, Reuters, 9/27/14

Foreign executives should be under no illusion about the great personal risks they run if they chose to do business [in Cuba].

— Stephen Purvis, Chief Operating Officer, Britain’s Coral Capital, who spent 16 months arbitrarily imprisoned in Cuba and whose company had all of its assets confiscated, The Economist, 8/13/13

Founding a joint venture in Cuba for a small or medium-sized foreign company is the same as putting a noose around your neck.

1 thought on “You want to invest in Castro’s Cuba? Caveat Investor”