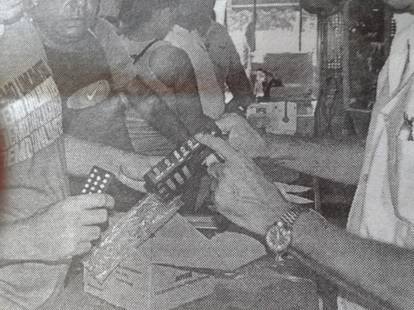 The little box or the hospital?

A friend, whose name I withhold in order not to harm him, tells me of a neighbor “partner” of his who works in the Ministry of the Interior and who became, what we call here a “super salary,” who confessed to having raised the following complaint at his work center:

“I earn 690 CUP (Cuban pesos), which here is considered a good salary. Recently they passed by my office taking note of colleagues who were interested in buying the decoding boxes for digital television; this equipment, according to what they explained to us, has the purpose of converting the digital signal into analog for those people who, like me (the majority), cannot immediately replace the less modern televisions that we own.

To my understanding, they are of two prices: they cost 30 and 38 CUC (Cuban convertible pesos), depending on their functions. I, of course, would opt for the more economical which, multiplying its price by 25 CUP, as they do in the stores, becomes 750 CUP and I earn 690 monthly, therefore I would have to take 250 CUP from my salary for three months until matching the price of said box, and make do however I can during those 90 days, which means that during this period of time I will not be able to buy milk, pork meat or vegetables and will even have to neglect my grooming a little, besides which with the remaining 440 CUP I will have to pay each month for gas, electricity, water, phone and some other essential grooming article like soap, which would be impossible because that would far surpass my meager budget.

“What to do then?  Get used to not watching television when I arrive home, tired after a long work day, because of not acquiring the little box, or failing that, go after acquiring it, directly to a hospital?”