If there is anything the reformed apartheid Castro dictatorship hates more than an opposition activist, is a gay opposition activist. The Cuban regime may despise gay Cubans, but they consider the whole LGBTQ movement a great propaganda tool. And they will be damned if they are going to allow someone from that movement ruin it. 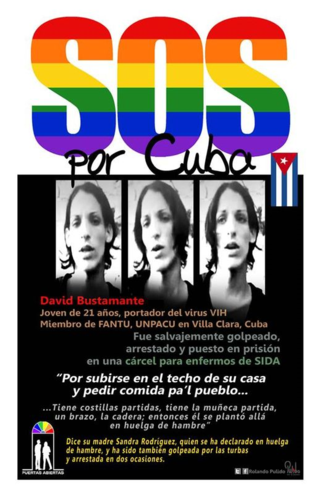 Cuban opposistion activist David Bustamante Rodriguez is awaiting sentencing, after he was tried and convicted — as if the verdict after his arrest in May was ever in doubt — on charges of “assault” and “public disorder.”

Bustamante, a gay rights activist and a member of the Patriotic Union of Cuba, was arrested May 26, after he took to the roof of his home to launch a peaceful protest against the Castro dictatorship. In response to the protest, the regime unleashed one of its mobs to besiege Bustamante, which eventually led to his arrest.

Numerous guards were stationed in the Santa Clara courthouse blocked anyone from attending, except for some of Bustamante’s family members. Other activists were arrested in order to keep them away.

For his part, Bustamante, who suffers from AIDS, denounced the proceedings as a “farce and a show,” saying that if anyone was guilty of public disorder, it was the mob sent to attack him last May. Those who testified against him were “manipulated” by the police, Bustamante said.

According to marticnoticias.com, Bustamante, who is being held in a Santa Clara prison for AIDS patients, will be sentenced in 10 days. 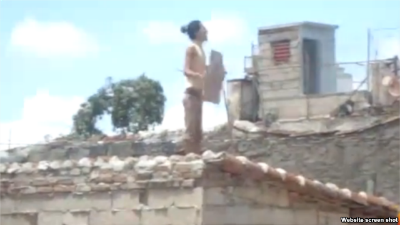 The protest that led to David Bustamante’s arrest in May.