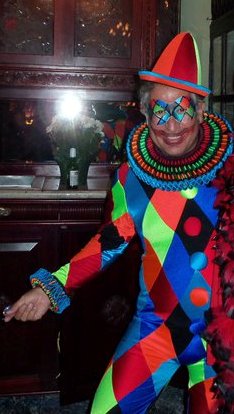 There is no arguing that over the years, the clownish acts of Rep. Joe Garcia have been a never-ending source of laughs. The buffoonish Cuban American politico has an uncanny ability of repeatedly sticking his clown-shoe sized foot in his mouth (and earwax as well). But there is a dark side to this clown as well. Garcia’s clownish behavior also includes voter fraud, associations with dubious characters, corruption, and a penchant for doing whatever is necessary, no matter how unethical, to obtain or stay in power. It turns out Joe the Clown is as scary as he is funny.

The past two years have been turbulent ones for Congressman Joe Garcia and his staff. An absentee ballot scandal in 2012 led his chief of staff, long time friend and confidante Jeff Garcia to a ninety day prison sentence as part of a plea agreement. Other staffers were being investigated by authorities and in order to avoid possible legal entanglements have agreed through their attorneys to extend their statute of limitations.  At the same time officials are reported to be looking into the role the 2010 Joe Garcia congressional campaign played in the placing of a tea party ringer candidate into the race in order to divide up the Republican vote. Despite all of this and Congressman Garcia hiring of a criminal defense attorney, David Markus, he claims to no longer be under investigation but news accounts say different. This is not the Florida 26th Congressional District’s first rodeo, but when candidates get desperate in a heated campaign they do things sometimes that harm others and later come back to haunt them.

Joe Garcia did something on October 27, 2014 that no Cuban-American congressperson has ever done by placing a Cuban dissident in a paid political advertisement as an endorsement to advance his own candidacy. The campaign’s press release was clear:  “Today, the Joe Garcia for Congress campaign announced that … Guillermo “El Coco” Fariñas, … had declared his support for Representative Joe Garcia. Unfortunately, it also turns out to not to be true or as one blogger declared “bogus.”

2 thoughts on “Rep. Joe Garcia (D-FL): The clown that is as scary as he is funny”