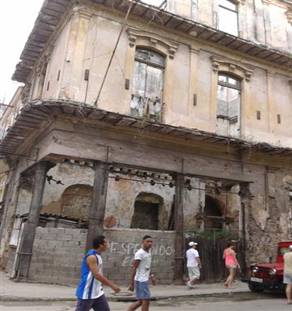 When I hear some of our nation’s leaders talk about the Republican era — and many of officials repeat what they say — I get the impression the country was one vast wasteland, without an education or public health system, without highways, aqueducts, sewers, water mains, electricity, telephones, hospitals, schools, factories, businesses, cinemas, theaters or many other things.

Could it be that our towns and cities were a highly developed virtual reality? Does what we see today, now all quite dilapidated, not exist before 1959?

In reality it all existed. Furthermore, it was in even better condition than today and was continually getting better. When you have no important accomplishments to your credit but rather only a series of failures, you must deny the existence of everything that came before, which allows you to pretend you were starting from scratch. Then whatever you have done, good or bad, becomes the sole reality. That is what we have tried to convince the younger generation, who have no firsthand experience of the Republican years.

When we ourselves were young, we were  proud of our country. We respected the national anthem, the flag and the coat of arms. We were aware that not everything was perfect or even worked well, but we tried to improve things and, most importantly, we did not leave Cuba. The only aspiration of today’s younger generations is to emigrate to some other part of the world where they can realize their personal goals. They have lost any hope of being able to solve all the many problems which have accumulated over the years. This is the reality, and not the virtual kind.

I remember a scandal from the Republican era that involved an intoxicated US Navy seaman desecrating the statue of José Martí in Havana’s Central Park. Today, some Cubans use this site and the doorways of the surrounding buildings as a public urinal, mainly at night, in the face of widespread public indifference. Anyone wishing to verify this need only take a stroll through the area in the early hours of the morning. In reality there is much that has been lost, and not just material things.

When historical continuity is severed and whole eras are distorted or swept aside, you get the situation we have in Cuba today. The country is no longer of interest to most of its citizens. Everyone carves out his own little personal corner and adapts it to meet his needs, forgetting about everyone else.