Just because the infamous Generational Shift among Cuban American voters has never materialized, it doesn’t mean its pro-Castro proponents can’t manipulate, twist, contort, and in some cases fabricate numbers in an attempt to create the illusion it has finally arrived. 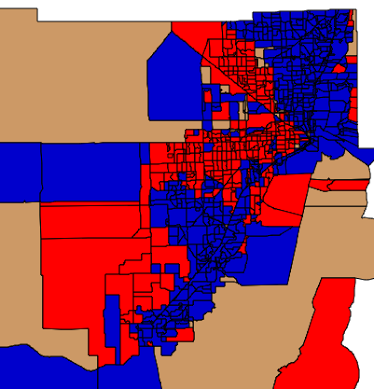 After making Charlie Crist’s race for Florida Governor a referendum of their policy views, they are now reeling from the loss.

Thus, in a last-ditch effort to test the public’s intelligence, they absurdly purport Crist (despite his overall loss) won the Cuban-American vote (50-46%). Their basis is a non-scientific, CNN election day exit poll.

Never mind that — if this were true — Crist might be moving to Tallahassee right now.

Moreover, U.S. Rep. Joe Garcia (D-FL) would have won reelection, rather than losing Miami-Dade County by 5%.

These Cuba policy foes — and the political operatives who helped walk Crist off the plank — think the public is naive and mathematically challenged.

Hence they seek to peddle a non-scientific, election day exit poll, which doesn’t even factor any early voting and absentee ballots (through which a significant amount of Cuban-Americans vote), and whose minimal sample makes it notoriously unreliable.

Fortunately, the facts are easily accessible to anyone (who is not lazy and dishonest) by simply tabulating the actual ballots cast.

It clearly shows that Scott won all of the precincts with the highest Cuban-American voter concentration.

For example, in the Hialeah precincts, where a majority of Cuban-Americans run the spectrum from first-wave to recent-arrivals, Scott won by over 65%.

Here’s a sampling of some of those precincts (and Governor Scott’s actual ballot performance):

Moreover, in all of the majority Cuban-American precincts, turnout surpassed the county-wide average.

In other words, not only did Cuban-Americans vote against Charlie Crist, but they did so more intensely than their peers.

The election results speak for themselves.