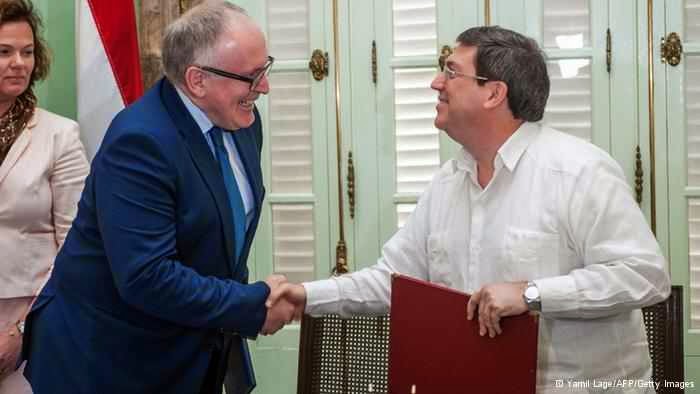 With Dilma Rousseff’s prodigal generosity for the Cuban government now being watched carefully by a powerful opposition, and amid Venezuela’s debacle due to falling oil prices and a talent for failure by Nicolas Maduro, the Cuban regime has intensified its search for money elsewhere in order to remain in power.

The principal figures of the dictatorship have spent months diligently, as we say colloquially, “begging for water through gesticulations” (“pidiendo el agua por señas”). Those cries for help have resonated in the European Union, in some sectors of North American society and among a group of rich Cubans — pragmatic and with short memories.

The most important bites, both politically and economically, have been in the Old World.  Europe has held two rounds of talks with the Castro regime to reach an agreement that would substitute the Common Position, which was proposed by the government of Jose Maria Aznar and adopted by the European Union in 1996. Another round of talks will be held in Havana this December.

The reality is that it hasn’t been necessary to wait for the Europeans and the soldiers of real socialism to sign an agreement of cordiality, friendship and closeness.

In April, French Foreign Minister Laurent Fabius traveled to Cuba to cheer up the disguised Spring of the Caribbean. His colleagues from Norway and Holland also went to get some sun and, in October, Hugo Swire, the U.K.’s Vice-Minister of Foreign Affairs, enthusiastically responded to Cuba’s SOS with a visit where he stressed to the “guayabera-clad” men: “I’m here to show the support the United Kingdom will give to the economic changes Cuba is undertaking.”

Precisely, in October, nine dissidents were condemned to sentences of between two and seven years in prison and another 12 await for manipulated trials by the police. That same month, 413 arbitrary political arrests took place, 13 government opponents were victims of physical aggression and paramilitary squads attacked the homes of eight human rights activists.

None of the visitors peered at the streets through the windows of the limousines that take them to the luxury hotels, where they signed friendship accords and exchanged hugs with government officials.