Skip to content
“I swore never to be silent whenever and wherever human beings endure suffering and humiliation. We must always take sides. Neutrality helps the oppressor, never the victim. Silence encourages the tormentor, never the tormented.” 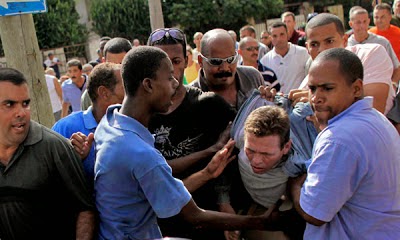 On Tuesday night, an agent of Castro’s secret police forced his way into the home of Cuban democracy leader, Guillermo Fariñas, and stabbed four dissidents, seriously injuring two members of The Ladies in White.

Despite this violent (and potentially lethal) attack, days later, the agent continues to roam the streets freely, harassing and threatening peaceful democracy activists.

Not one Havana-based foreign journalist has investigated or reported on this violent attack.

Moreover, not one European or Latin American diplomat, or government official, has had the moral decency to condemn this violent attack.

The one international exception has been U.S. Assistant Secretary of State for the Western Hemisphere, Roberta Jacobson, who tweeted her concern.

Meanwhile, New York Times editorial writer Ernesto Londoño has been busy in Havana touring Castro’s state media rag, Granma; the pro-Castro publication, On Cuba; and giving interviews on why the U.S. should unconditionally embrace the last remaining dictatorship in the Americas.

Londoño’s itinerary shouldn’t be surprising. After all, Granma tours are a centerpiece of The New York Times‘ official “people-to-people” trips to Cuba. (Sadly, we’re not joking — see here.)

Under Raul Castro’s rule, not only has repression dramatically risen (political arrests have quadrupled), but we’ve seen the mysterious deaths of two renowned Cuban democracy leaders (and Sakharov Prize recipients) — Laura Pollan of The Ladies in White and Oswaldo Paya of the Christian Liberation Movement.

It’s believed the target of this week’s attack was Guillermo Fariñas himself, who is also a Sakharov Prize (a recognition bestowed by the European Parliament) recipient. Where’s the European Union’s outrage?

Such immoral silence — from foreign journalists and diplomats — only enables Castro’s impunity and violence against peaceful dissidents.

It’s precisely this silence that some want U.S. policy and policymakers to emulate.