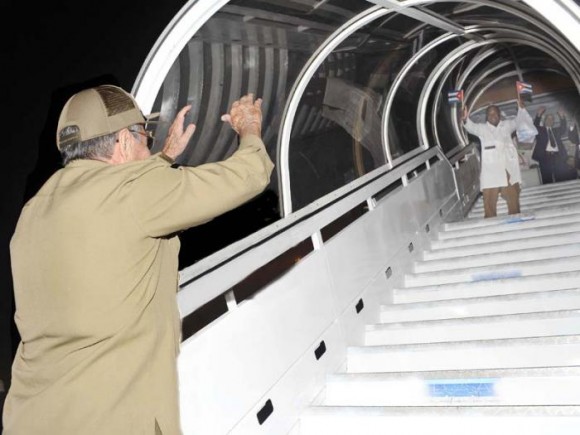 During an interview last Thursday on his afternoon radio program the host, Ninoska Perez, told me about the mood she perceived in the Cuban medical brigade workers dispatched a few days ago by Raul Castro. She was struck by the “unfriendly” demeanor some of these professionals showed upon leaving for West Africa to confront the Ebola epidemic. I could not comment because I had not seen the television program in question, but her observation did cause me to think about the motives of Cuban health care workers who have joined medical missions in recent decades.

Although regularly presented by the Cuban government as examples of lofty philanthropic aspirations, in reality these missions have become in the span of a few short years the main source of income for this Caribbean nation. We have all witnessed how the government in Havana — rather than simply acknowledging that this is a fee-based service from which it has, on the whole, profited handsomely — continues to portray my self-sacrificing colleagues as selfless messiahs.

At the same time it downplays the notion that a health care worker — someone who is paid poverty-level wages — might embark on such a mission in order to somewhat mitigate his desperate economic situation. The pretense is that this is more than simply a contract labor issue, something for which a fee is paid. In itself this is certainly not immoral, but the assumption is that the “new man” is motivated only by the purest form of altruism.

Far be it for me to question those who put themselves in harm’s way. As I am not God, I have no right to do so. In light of what they are doing, a modicum of humility on my part is in order since I am not the one facing possible exposure. Nevertheless, a number of facts come to mind that cannot be denied.

First of all, the Cuban professionals who have been sent on these missions for more than a decade now do not do so under the same conditions as their counterparts from other countries. Elsewhere, these things follow a natural course. In other words, the workers themselves make the decision to enter into employment contracts based on their own interests and prospects.

Under a totalitarian government like Cuba’s, however, the parameters are quite different since our professional workers are not operating from a position of personal freedom.

It is no secret that a health care worker on a medical mission almost never has any say over where he is assigned. And once in the host country, he is monitored as though he were a child. This applies to his personal relationships — from the people with whom he talks and associates to when and where he goes out with them — as well as to even very small payments for outside work, which are expressly forbidden.

Furthermore, while working overseas, his “salary” is no more than 15% to 20% of the contract price agreed upon by the two governments. In many cases this amounts less than the legal minimum wage in the host country. The remainder is retained by the Cuban treasury.

Upon his return, our colleague is not allowed to bring into the country anything more than stipulated by the mission director, which amounts to a few very limited boxes of merchandise, and then only after his period of service has officially ended. Back in Cuba, he can access only half of the salary he was paid, with the balance remaining frozen in some Cuban bank.

In the event he should decide to end his term of service earlier than expected for personal reasons, he would be considered a deserter and would forfeit all the money he had earned. Even his family would not be able to access his bank account. He would also be strictly prevented from returning to Cuba for eight years, even for a short period to visit his children or in the event of a serious illness or the death of one of his parents.

Given all this, it is understandable why Ninoska would describe the current contingent as “an army of slaves.” Setting aside the harsh description, it is evident that the relationship the government maintains towards individual workers is not one of respect but rather continues to be punitive and despotic in nature.

But there are parts of the world that still do not understand that the government that treats its citizens in such an arbitrary way is the same one that is sending our colleagues to Africa. It is the same one that is killing us at airports with astronomical prices and draconian customs regulations, the same one which pays us salaries that are laughable when compared to a cost of living that reaches soaring heights, the same one that does nothing to mitigate the state of affairs it itself has created and encouraged, all of which are incompatible with its humble proclamations of universal generosity.

Under such circumstances — knowing they face threats from an oppressive force that is both employer and executioner — it is impossible to assess the sincerity of some our health care workers when they appear in public singing the praises of the revolution, the party and proletarian internationalism. It is quite disturbing to see a familiar face among this group after having heard him complain bitterly about living and working conditions that are sometimes simply bad but often are appalling.

This “benevolent” government — the only one that is sends its physicians off to glory or to death — demonstrates its contempt for us in the most brutal way. And the reason it can do this with impunity is because it keeps trotting us around like victory pennants, or like the collateral behind the emotional blackmail it uses to garner votes and commitments from foreign governments in international forums.

That is why in domestic policy they can afford to grossly neglect the welfare of their own people. Who would guess that a government that takes the “laudable” action of sending a contingent to Africa larger than those of the rest of the world combined would be capable of subjugating its own people? How would a world dazzled by such an admirable initiative suspect that our civil rights are not respected or that on a daily basis we are subjected to physical attacks, arbitrary detentions and fully orchestrated acts of repudiation?

When Dr. Margaret Chan, Director-General of the World Health Organization, or John Kerry, US Secretary of State, praises the Cuban government — even when it is clear their remarks are limited only to its role in the current health crisis — they voluntarily or involuntarily concede ground and thus give Cuban authorities another slap on the back, allowing them to perpetuate their domestic policy of indentured servitude.

But those of us dealing with this grim reality are not deceived by those who have a monopoly on everything, even when they are disguised as sequined divas on the world stage. We don’t forget that this is the same government which continues to speculate with our most basic needs. We know that they intend to perpetuate our misery because they know that a bankrupt people, materially and spiritually impoverished, will always be more susceptible to their whims than a serene and prosperous people.

From Citizen Zero I wish my colleagues from Cuba and around the world much luck and success in this critical mission, which is essential if humanity is to eradicate this dangerous scourge. At the same time, I cannot help but abhor the way the Cuban government politically manipulates the personal risks these workers are assuming. Ultimately, it will be the infallible, inexorable and certain judgment of history that will separate the gold from the dross and the diamond from the coal.