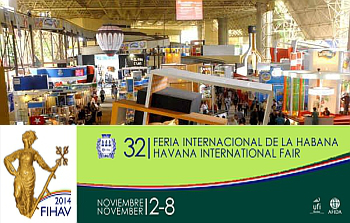 The 32nd Havana International Fair (FIHAV) 2014 closed its doors after a generous awarding of prizes this past Friday, Nov. 7. It’s said that Brazil was the exhibitor that saw the most growth in traffic from prior years, and Spain — with 132 participating companies — was the most-represented.

This statistic took into account Cuba’s presentation of the “Purse of Opportunity,” now a feature of the country’s new Foreign Investment Act, and the offers of special perks to businesses from the Mariel Special Development Zone. The Cuban proposals, fundamentally framed within the joint-venture model, places at the disposal of foreign investors concerns ranging from those that are active to semi-active – such as sugar refineries – to arable lands, as well as biotechnology and pharmaceutical enterprises.

In short, a promotional gamut of possibilities encompasses virtually all domains of production and services. The Cuban Revolutionary State, which confiscated everything, and everybody, at the start of its totalitarian experiment, now puts up for sale at least half of every asset they have remaining. Of course, this is just for foreigners.

When we Cubans on the Island approach these fairgrounds, we mark them with a bit of wonder, as distant spheres cut off from our reality — A Different Cuba, of which little or nothing has to do with us.

The same happens to us with tourist zones: Varadero, Cayo Coco or Cayo Roman, and with the medical and pharmacological research institutes — these are all spaces that are alien to the majority of Cubans.

They fill the isolated display cases/oases that are viewed and enjoyed by foreign visitors and a privileged few from the home turf. They are diverse pieces of this rigged jigsaw puzzle which the state has made of Cuba.

They are also a likely cause of the flattering, but inaccurate, comments from outsiders regarding our national scene. This whole dynamic – coupled with the crony-capitalist bad habit of ostensibly over-investing beyond the profit potential of the country — has created in the minds of many foreign speculators a “virtual reality” view of Cuba.

But our nation can only be itself. It is the product of all these different spaces, of its successes and failures, in which we Cubans all participate, be we here in the islands, in exile or in the diaspora spread across the world. It is this sense of joint belonging that unites and lifts us up, that makes us feel a certain, commonly-shared pride, when one or some of us stand out. It matters not if they are Cuban players in the American Major Leagues, artists, or volunteer doctors fighting Ebola in Africa.

Therefore, what we need to recover, so that we may join together as one people, are our liberties. We need to re-insert ethics into our value system, to once again place honesty above loyalty that is blind, deaf and dumb. In short, to relaunch a pluralistic democracy in which we all may participate with dignity, without exclusions, in the rights and duties appertaining to Cuban citizens – with no display cases in sight.