All major news outlets are reporting that Alan Gross has been released from prison with few details, except for that bastion of communist propaganda that is CNN:

Washington (CNN) — U.S. contractor Alan Gross, held by the Cuban government since 2009, was freed Wednesday as part of a landmark deal with Cuba that paves the way for a major overhaul in U.S. policy toward the island, senior administration officials tell CNN.
President Obama is expected to announce Gross’ release at noon.
Gross’ “humanitarian” release by Cuba was accompanied by a separate spy swap, the officials said. Cuba also freed a U.S. intelligence source who has been jailed in Cuba for more than 20 years, although authorities did not identify that person for security reasons. The U.S. released three Cuban intelligence agents convicted of espionage in 2001.

So the Obama administration traded 3 spies implicated in the murder of US citizens for a humanitarian worker and an “unknown” intelligence source. Because bowing to communists and terrorists is what Obama and his cohorts do best.

This is a major setback for the opposition and dissident movements in Cuba. The Obama administration, by making this “deal”, has confirmed that they are OK with the repression, brutality, incarceration, and murder the castro regime foists upon the opposition. And I will once again say what I have been saying since day one of this farce of a presidential administration, for the record: faced with the fact that he is, by far, the worst President this nation has ever seen, and with no true positive legacy, Obama is relying on the low hanging fruit of the Cuban embargo to placate the left. Look for President Executive Action to undermine codified US Cuba policy.

Obama is set to speak on this at noon today. Listen as the president tramples upon the rule of law, justice, the Cuban-American community and freedom loving Cubans on the island.

For over five years, the Castro dictatorship has held American development worker, Alan Gross, as its hostage for helping the Cuban people connect to the Internet.

This shows the cruel extent to which the Castro dictatorship is willing to go in order to try to silence its own people.

With Gross’ hostage-taking, the Castro dictatorship has sought to coerce the Obama Administration into releasing Cuban spies imprisoned in the United States and to unilaterally ease sanctions.

Today, this innocent American, who should have never been imprisoned in the first place, is returning home to his wife and daughters.

But sadly, rather than being released unconditionally, the Obama Administration has acquiesced to the Castro regime’s coercion.

While we are relieved at the release of this American hostage today, there are 11 million Cubans that remain hostages of Castro’s brutal regime. Moreover, repression in Cuba today is at a historic high.

In exchange for Gross’ release, the Obama Administration will announce the release of three Cuban spies imprisoned in the United States for crimes, including a conspiracy to kill Americans.

Today, our hearts go out to the families of those young Americans, the pilots of the Brothers to the Rescue planes disintegrated in international waters by Cuban MIGs, who were murdered by the Castro regime with the help of these Cuban spies.

The Obama Administration will additionally announce that it will use its executive authority to ease a set of U.S. sanctions — also in exchange for Gross’ release.

As a result of these actions, the world today will be less safe.

Rogue regimes throughout the world will take note that you can take American hostages and will be rewarded with policy concessions.

Moreover, that rogue regimes can murder Americans, have U.S. courts and juries duly convict those involved — and see justice aborted by a stroke of the President’s pen.

UPDATE: Just as a stark reminder, here is the audio of the downing of the Brothers to the Rescue pilots, which the 3 Cuban spies being released are complicit in.

Obama is trying to cement his legacy. Human rights be damned.

UPDATE:During Obama’s remarks – which I confess I could barely stomach – he had the audacity of quoting Jose Marti. Yet with one glaring omission:

He left out the most important part:

“Liberty is the right of every man to be honest, TO THINK AND SPEAK WITHOUT HYPOCRISY.”

Sometimes, what’s not said is what rings loudest. 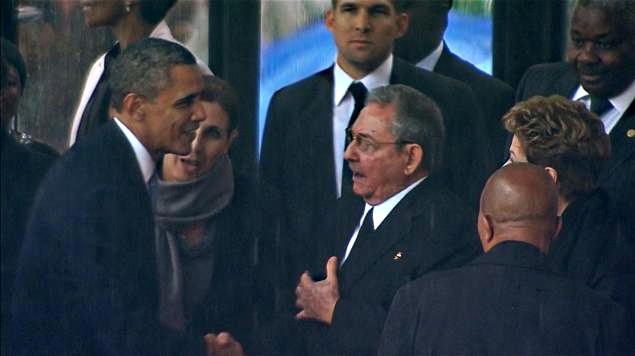