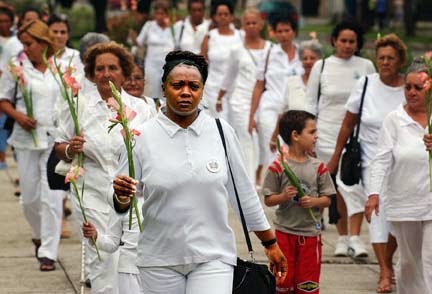 — Berta Soler, leader of The Ladies in White.

“[Alan Gross] was not arrested for what he did, but for what could be gained from his arrest. He was simply bait and they were aware of it from the beginning… Castroism has won, though the positive result is that Alan Gross has left alive the prison that threatened to become his tomb.”

“The Cuban people are being ignored in this secret conversation, in this secret agreement that we learned today. The reality of my country is there is just one party with all the control and with the state security controlling the whole society. If this doesn’t change, there’s no real change in Cuba. Not even with access to Internet. Not even when Cuban people can travel more than two years ago. Not even that is a sign of the end of the totalitarianism in my country.”

“[Obama’s announcement] is horrible and disregarding the opinion of [Cuban] civil society sends a bad message. The acceptance of neo-Castroism in Cuba will mean greater support for authoritarianism in the region and, as a consequence, human rights will be relegated to a secondary role.”

“Alan Gross was used as a tool by the Castro regime to coerce the United States. Obama was not considerate of Cuban citizens and of the civil society that is facing this tyrannical regime. In Miami, Obama promised that he would consult Cuba measures with civil society and the non-violent opposition. Obviously, this didn’t happen. That is a fact, a reality. He didn’t consider Cuba’s democrats. The betrayal of Cuba’s democrats has been consummated.”

“The Obama Administration has ceded before Castro’s dictatorship. Nothing has changed. The jails remain filled, the government represents only one family, repression continues, civil society is not recognized and we have no right to assemble or protest… The measures that the government of the United States has implemented today, to ease the embargo and establish diplomatic relations with Cuba, will in no way benefit the Cuban people. The steps taken will strengthen the Castro regime’s repression against human rights activists and increase its resources, so the security forces can keep harassing and repressing civil society.”

“We are in total disagreement with what has transpired today. It’s a betrayal of those who within Cuba have opposed the regime in order to achieve definitive change for the good of all Cubans.”

“It’s discomforting that the accounts of the Castro regime can grow, as the first step will be more effective repression and a rise in the level of corruption.”

“This is a betrayal that leaves the democratic opposition defenseless. Obama has allied himself with the oppressors and murderers of our people.”

“I feel as though I have been abandoned on the battlefield.”