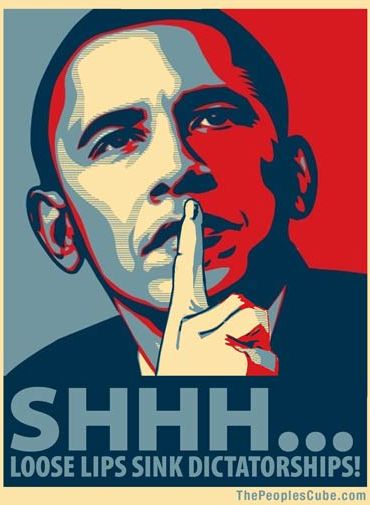 What else would you expect from the most transparent administration EVAH!

Why Isn’t Obama Being Transparent About His Deal With Cuba’s Regime?

When President Obama first took office in 2009, he declared that “transparency promotes accountability and provides information for citizens about what their government is doing.”

Well, either Obama is not being transparent about his secret deal with Cuban dictator Raul Castro.

Or the deal is even worse than we thought.

In exchange for a myriad of concessions from the United States, the Castro regime was supposed to release 53 political prisoners.

Apparently, Obama was unaware that the Castro regime has been trading political prisoners for concessions for decades — just ask Jimmy Carter — and then re-arrests them (or new ones) later.

However, no negotiated political prisoner release has ever been surrounded with such silence and mystery — or lack of “transparency” — as the current 53.

As Reuters reported this morning:

“Cuba’s most prominent dissidents say they have been kept in the dark by U.S. officials over a list of 53 political prisoners who will be released from jail as part of a deal to end decades of hostility between the United States and Cuba. For years, dissident leaders have told the United States which opponents of Cuba’s communist government were being jailed or harassed, but they say they were not consulted when the list of prisoners to be freed was drawn up or even told who is on it. The lack of information has stoked concern and frustration among the dissidents, who worry that the secret list is flawed and that genuine political prisoners who should be on it will be left to languish.”

According to Obama, the Castro regime also agreed to release a Cuban, U.S. intelligence asset, who is widely believed to be Rolando Sarraff Trujillo.

Sarraff Trujillo was exchanged for three Cuban spies imprisoned in the U.S., including one serving a life sentence for a conspiracy to kill Americans.

As if this 1-for-3 deal wasn’t bad enough, there’s still no information about Sarraff or his whereabouts.

As Reuters also reports, “his parents said they are desperate to hear from their son as they haven’t spoken with him since before Obama’s Dec. 17 announcement.”

Meanwhile, former spy and double agent, Bill Gaede, who worked closely with Sarraff in the 1990s, has shed further doubts:

“The only reason people strongly suspected that the mysterious spy might be Rolando Sarraff Trujillo (a.k.a. Roly) is that his family can’t find him. Cuban prison officials told them that their son had been transferred, but not to worry about him. He was in ‘good hands’. Certainly, Roly fit most of the description made by Obama at his press conference announcing reestablishment of relations with Cuba: a Cuban intelligence officer locked up for 20 years for providing cryptographic information that led to the capture of the aforementioned spies. So who else could it be? And if in addition the Obama Administration ‘carelessly leaks’ the name through ‘unidentified official’ sources, we have the makings of what appears to be ‘disinformation’. This speculation is reinforced by Roly’s resume. It certainly meets the ’20 years’ part. It does not even come close to meeting the part about ‘cryptography and the capturing of the Cuban spies’. There’s a contradiction somewhere. Either the secret spy is not Roly or President Obama is lying through every corner of his mouth.”

Needless to say, we believe the President of the United States over a former double-agent like Gaede.

But Obama’s lack of transparency is not making it easy.